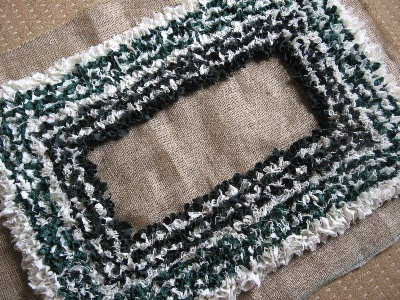 Looking for something to do with my hands whilst listening to the results coming in on election night, I decided to get on with Chertsey's first custom-made rug. It was along night, as I was determined to wait for the result from Brighton Pavilion, where the Green Party had its first real chance of securing a seat (which of course it did, hurrah). It was interesting not only because I have a great deal of time for Green politics, but also because it's a nearby constituency (next door but one along the coast). You may not still have been up, but that result finally came in at about six a.m., after I'd gone round the house opening the curtains again and was just sitting staring rather fixedly at the computer screen, having augmented Radio 4's coverage with the rather good Guardian election blog. By then I'd run out of bits of stuff, but after a couple of hours sleep I cut up some more and continued podging whilst watching (well, listening to) events unfold.

Now, I already have a rug in Chertsey's cabin. This is the very first one I made, which sat safely, untrodden, on Warrior's side bed until someone (ahem) put a creosote (substitute)-soaked fender down on it. This was a blessing in disguise really as it meant it could now be used for its proper purpose. It is now filthy, but does an excellent job of trapping dirt and stopping it getting all round the cabin. This new one will, for now, be for best. The plan is to keep it on the bed during the day, and only put it down at night as a treat for my bare feet. Eventually it will get grubby, or some accident will befall it, and it will slip down the rug league to be replaced by another interloper at the top. But I suspect it will still be there long after whatever government we get out of this intriguing situation is long gone, and hopefully it will remind me of that momentous night.

It's not exactly designed not to show the dirt, as I have based it on the cream and green paintwork of Chertsey's back cabin (and indeed engine room). Baz may notice when he next changes his bedclothes that his cream wincyette sheet has disappeared. However, as he only changed them last week I should be safe for about six months yet.... It is so far in my standard concentric oblongs pattern, which is what I do because I never know in advance how much I'm going to have of any particular fabric, which makes planning patterns difficult. I think I'm going to be a bit more ambitious this time though and perhaps go for a diamond pattern in the middle.
Posted by Sarah at 14:45