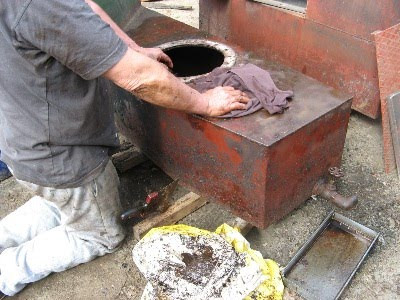 Normally it's a sound that I love, but my heart sank when I heard rain on the roof at four this morning... However, it's now bright sunshine, so hopefully everything will be dry again soon and we will be in for a good day. Yes, it's back to the Stretton daily diary, as we continue in the crazy attempt to get Chertsey sufficiently ready to go to Braunston... which will mean leaving here in about five weeks time.

With that in mind we decided to concentrate first on the engine room, as having the engine in is a bit of a prerequisite for going anywhere. The new tailshaft and boss have been fitted, and a wonderfully clean and polished prop is in place, which greeted us when we arrived yesterday lunchtime. So Jim got stuck back into the fuel tanks (not quite literally) cleaning out the insides and stripping the paint off the outsides, while I got on with wirebrushing, rubbing and painting the floor sections. 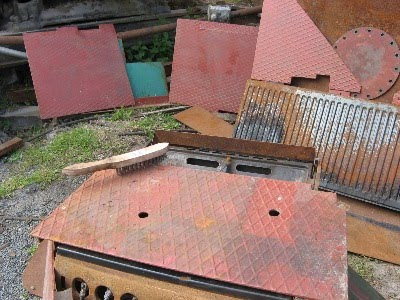 This is what the inside of the tank looked like after a lot of black slime and flaky bits had been scraped and scooped out: 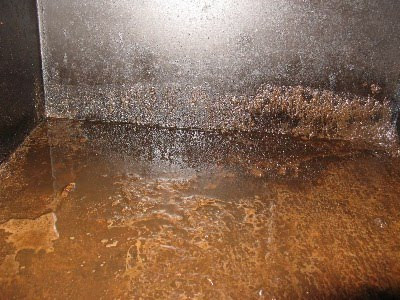 Here on the back of the tank you can see where Chertsey's name has been rougly painted on occasions when the tanks have been removed before - at least three different times by the look of it. No other names on there, so it looks like these have always been with the same boat. 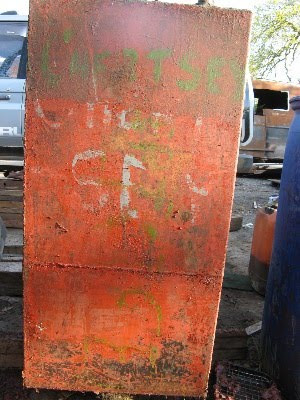 There's bright sun shining in on me now, so time to get off the internet and get some work done!

placeholder
Posted by Sarah at 08:18