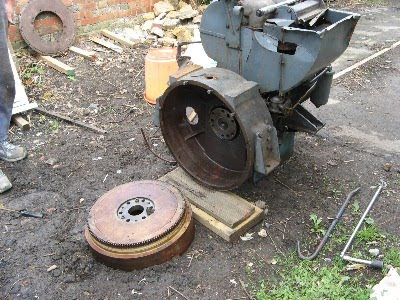 I was sitting upstairs this afternoon when I sensed, rather than heard or felt, a mini shockwave. I dashed to the window and saw that Jim and Aaron had finally succeeded in getting the flywheel off. With the weight of that, and its casing, removed, they were then able to 'walk' the engine to the side of the drive so that the third Volvo could come out. We hooked the electrics up to the trailer and it all worked, so its booked in for an MOT tomorrow, and on that (and a bit of a trial outing) rests whether we will be fetching the new engine up to Chertsey a week on Saturday. It's very frustrating being away from the fray while there's painting still to be done(!) and time moves inexorably on, but if we could collect the engine en route it would make the trip much more worthwhile.
Posted by Sarah at 20:35