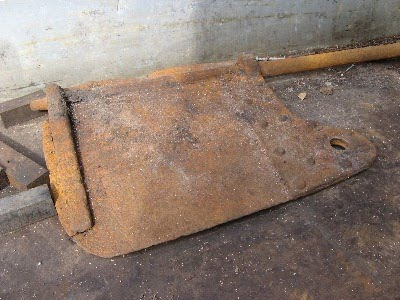 The other thing we have done over the last couple of days is to empty the trailer of all the bits and spares that came along with Chertsey. These include three oil pumps (not including the one on the engine) and, hooray, an oil filler casting to replace the one that got broken. It also includes a wide variety of large and heavy and small and rusty objects, none of which of course must ever be thrown away. All these bits (also including two crank cases, one complete with pistons, and two sumps, but, perhaps thankfully, no spare flywheels (although at least one casing)) have been transferred from a container at Dimmingsdale into Chertsey's hold; out of the hold onto the bank, thence into the trailer, and now finally into our outbuilding.

And right at the bottom of the trailer was this rudder, which was submerged in Cherstey's hold. We'd identified it as probably being off a Grand Union boat, but didn't know which, when or why. Then last week I had an email from Richard Pearson. I mentioned him before, as having been Richard Barnett's business partner - which he was, but not in relation to Chertsey. However, he did know and boat with Richard B. in the early seventies, and he told me the story of the rudder:
So this is Chertsey's original rudder - now a bit too rusty and fragile to be used, I think I will keep it at home for the time being; maybe even put it on display in the front garden! Richard P. also sent me some more photos of Chertsey, with permission to use them, so I will post them soon.
Posted by Sarah at 20:44