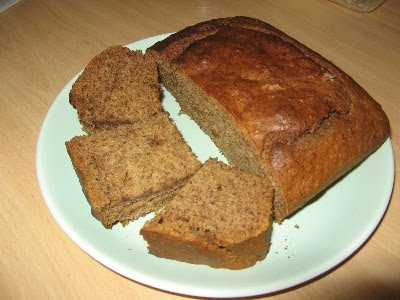 As promised, Simon has sent me the recipe for the lovely (vegan) banana cake that Carrie brought to Little Venice last week. Here it is:

Making it couldn't be easier. You can mash the bananas, mix in the oil, sugar and water, and then fold in the dry ingredients, or you can do what I did and throw all the wet stuff in the trusty Magimix, followed by the dry stuff. Put it in a lined tin (the recipe says 9", mine was about 7"; it took longer but was nice and tall) and cook it at mark 4 til it's done (mine actually took about an hour; it would be less in a bigger tin). It got Baz's seal of approval too; he said 'it's even nicer than ordinary banana cake'. So if you fancy being vegan, or need to cater for someone who eschews dairy, or just want a really easy, lovely cake, this is it.

I must admit I balked a bit when I first saw that the measurements were given in American cups. The first thing I did was look up a conversion (1 cup = 240ml, by the way), but then I thought I would have a look and see if I still had the cup measures I acquired years ago, though I was pretty sure I'd got rid of them. Sure enough I had, but I was delighted to find that this little aluminium cup which I bought at the last jumble sale I went to was in fact a measuring cup. 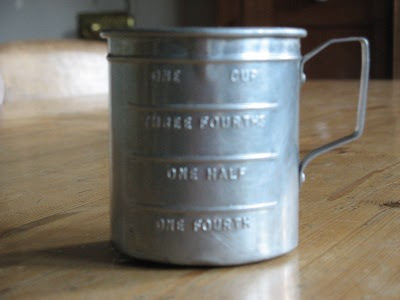 It will now take its place on Chertsey, in case the oven is ever the right temperature for making cake.
Posted by Sarah at 21:11