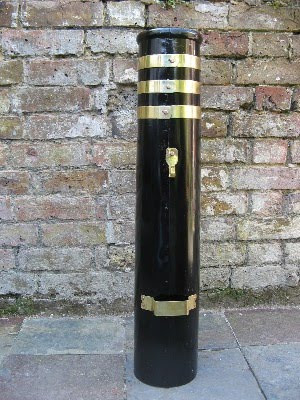 One of the things we did at the Little Venice Cavalcade was to collect the chimney that I have had made for Chertsey. It's quite difficult to get hold of a traditional-style stove chimney; mass produced versions are not only flimsy, but far too short. If you were standing next to it all day, you definitely wanted something that would carry the smoke way over your head - so working boat chimneys tended to be around 30" tall - and were often extended further with an old tin; traditionally a National dried milk tin. (I do in fact have a suitably ancient Ambrosia milk tin, but I am a bit loath to chop it up for this purpose, and anyway, being a shortarse, I probably don't need to).

At least one person who used to make old fashioned chimneys has recently stopped, but someone else has stepped in - Mike Pinnock (junior), of Clover and Fazeley, who Jim found through CWF (yes, CWF saves the day once more). Mike is happy for me to pass his number on to anyone who's interested in getting a chimney made, so do let me know if you would like it.

The chimney is all handmade, including the brass handle: 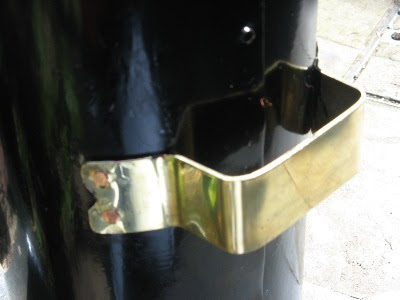 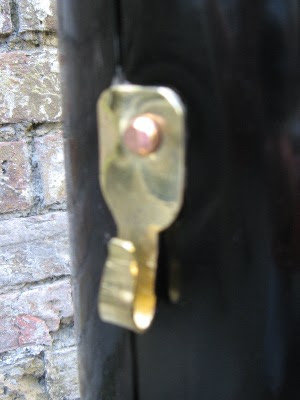 with the chimney itself being made of riveted stainless steel, (The rivets in the seam are also stainless, and the copper ones are affixing the brass.) 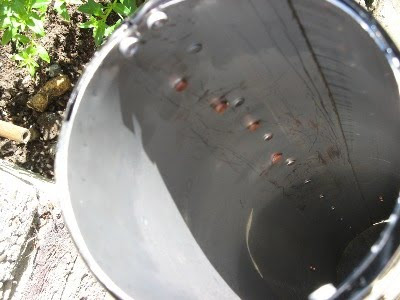 with brass bands and aluminium D-band around the top. It's single-skinned, so I may need to think about putting a liner in it. I'm very pleased with it. The finish isn't perfect, but then I wouldn't want it to look like a mass produced thing. It's solid and chunky and handmade, and I think very fitting for Chertsey. I can't wait to go up and put it on, along with its chain - and see whether my careful measuring was accurate. I shall also be measuring up for the engine exhaust pipes, and putting in an order for them next.
Posted by Sarah at 18:54