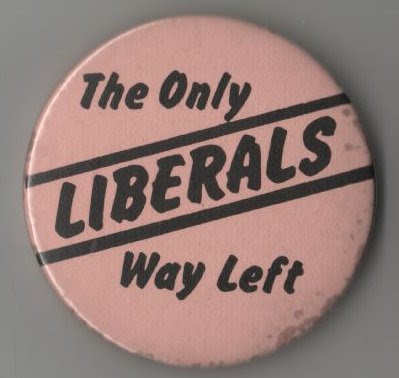 Historic artefact from the early 1980s which comes out at every election,
much to the consternation of respectable local Lib Dems
When people find out what I do for a living (I'm a Politics lecturer, for anyone who didn't know), they either glaze over and change the subject, or show a polite interest by asking who I think is going to win the election. To be honest, I have no more idea than the next person. I'm not a psephologist (the statistics makes my brain hurt) although I love going to the psephology sessions at the Political Studies Association conference in the same way as I used to like watching Open University broadcasts on a Sunday morning, to immerse myself in something completely incomprehensible but somehow nonetheless interesting.

I'm not even sure who I want to win the election, national government-wise. The prospect is pretty depressing whichever way you look at it. It's no secret that I'm a liberal, and indeed, was a Liberal - I joined the party in 1987, the year before they merged with the SDP to become the Liberal Democrats. 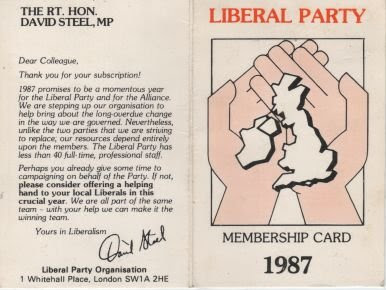 Socially, I believe in maximising individual freedom, privacy, human rights and human flourishing - for which a redistributive welfare state is a prerequisite. Economically I believe that the free market is an inevitable outcome of that individual freedom, and indeed, has its good points - but that it also has potentially harmful effects, including gross inequality, exploitation and environmental degradation, and that these need to be mitigated by the government acting on behalf of everyone. Obviously, lots of people hold very different fundamental views, and I'm not looking to engage them in argument here. But given that that is what I hold dear, what electoral outcome should I hope for tomorrow?

How I cast my own vote is an easy choice. I have a green-tinged liberal Lib Dem MP, whom I first campaigned for in 1992, and who was first elected in 1997. I can very happily vote for him (despite his lack of social skills and clean ties). But - apart from a lot more Lib Dem MPs, which I suppose would be a good thing, and a Green MP elected in Brighton Pavilion, which would be a brilliant thing - what should I hope for on the national stage?

One of the biggest issues for me is ID cards. The Tories say they will scrap them. But do I believe them? In my guts I simply don't. No government in power, unless it had a really strong, visceral, ideological opposition to the very idea, could bear to pass up such a wonderful toy. I haven't forgotten that Michael Howard wanted to introduce them in the eighties; it was principled and powerful opposition from Labour that stopped him.

And that brings me on to my own, small, theory about who should be in power, if you are of a lefty/liberal persuasion. All governments, by their very nature, by the very experience of being in power, tend to be authoritarian, and tend also to be conservative. Therefore, might it better to hope for a Conservative government, with a strong, principled, leftish Labour (or Lib Dem, or both) opposition to keep them in check... Because when Labour are in power, and corrupted by it, there's no-one to stop them.
Posted by Sarah at 10:10