Going on the dock

You often hear people talking about 'going on the dock' but never us - until now. Whenever we've needed to black a boat, or get underneath it, up till now, we've had it craned out onto the bank. Of course this was easy, ond obvious, when we were at Stretton with its on site crane.

But now we're at Alvecote, and the obvious place to go for blacking is the dry dock at Grendon. And boy, does Chertsey need blacking. If I tell you it was last done in 2010... 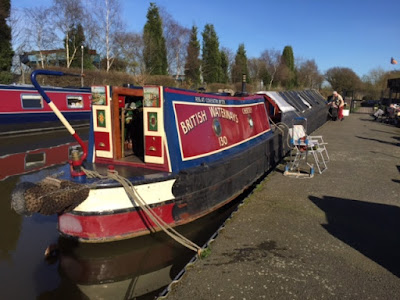 To be honest, I'm hoping that as it had three coats of Comastic then, brushed - brushed mind, not rollered - onto shotblasted bare steel, that it won't be too bad below the waterline - although I am sure that we've put plenty of scrapes into it over that last seven years.

In another new development, we won't be doing it ourselves. I have mixed feelings about this. I don't really have the time to spare to do it, and I'm not all that enthusiastic about exposing myself to more nasty potentially carcinogenic solvents than I have to - but at least when you do it yourself you know how well it's been done. I've never worked in a dry dock though and I don't think I fancy that much either.

So, I have booked Chertsey into Grendon dry dock at the end of May for someone else to pressure wash and black the hull. We're hoping to be able to time a trip to have a good look between those processes, and decide whether to have it done again with Comastic (more expensive) or if it's sufficiently sound to put bitumen on top - you can put bitumen on top of Comastic, but not vice versa. Hopefully we won't find any nasty surprises (although I still go cold when I think about Plover dragging us off that bridge pier on the Soar).

I'll have the tunnel bands done as well - and in proper red and white this time. Martin meant well when he painted them to match the livery (it isn't as obvious in the above photo as it is in real life), not realising we'd only just done them, but I've never felt that it looked right.
Posted by Sarah at 19:00