There is not much to say about this. The running log says 'shallow'. Then later it says 'very shallow'. We got stemmed up in some mud and I wrestled the long shaft out of the front of the boat and successfully pushed us off, but I couldn't manoeuvre the shaft back in once the bank was no longer there to support its weight - it needed to be held almost vertical, by the last couple of feet. A certain former superstar scaffolder of my acquaintance could have done it easily, but unfortunately he was steering at the time. Eventually I gave up and tucked it more traditionally into the topstrings. (It usually lives inside sitting on top of the chains along the side of the hull.) At one point we were travelling more slowly than a very recalcitrant toddler being taken for a walk along the towpath.

The high point of this waterway should have been the previously mentioned Black Cock Bridge, and here indeed is a photo of it. 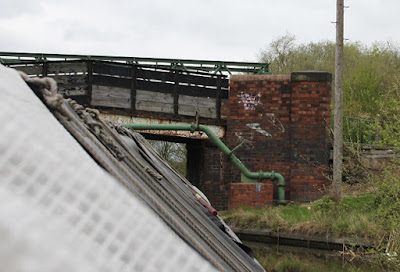 This is one of the many photos Jim took of it, but unfortunately none of them shows where it was jacked up (although I saw the gaps in the brickwork very plainly).