We were one of the first boats to arrive in Brownhills, on Thursday at lunchtime, so we were there for nearly four days in total - plenty of time to explore.

In many ways it was a very sad, run down, place. In the high street, even the HSBC Bank had a landlord's possession notice on it. Attempts at retail-led regeneration appeared not to have been successful: 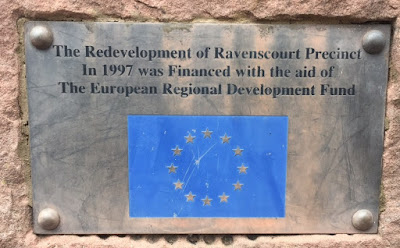 Twenty years later all the shops in this precinct were boarded up: 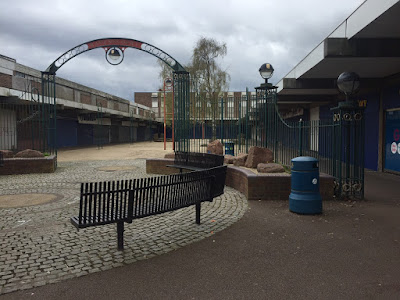 However, it did seem that the town could support three carpet shops, and the desolation on the high street could just as easily be attributed to the massive Tesco's which many of us (with some honourable exceptions) were all too happy to use as our fridge. And Jim, seeking a newspaper on Monday morning, found what from his description sounded like a newsagents-cum-coffee and cake shop run by two incongruously dapper chaps, doing a roaring trade.

House prices are not particularly low, and in fact there was a lot of new building too, suggesting - from my Newhaven experience - that Brownhills may be serving as a dormitory for Birmingham and that its residents are doing their shopping elsewhere. That elsewhere may even be Walsall, which (and we shall proceed there properly in due course) didn't seem to be doing too badly in its retail centre.

Enough of retail depression, I hear you mutter. Show us some boats! I think we put on a pretty good show: 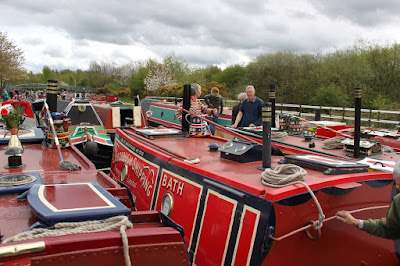 I think I counted about twenty five historic boats, and another seven or so members with more modern boats. 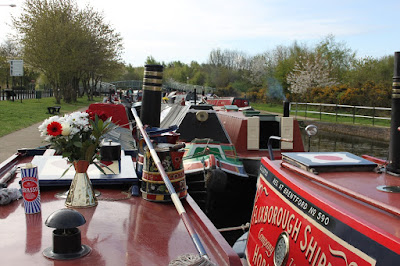 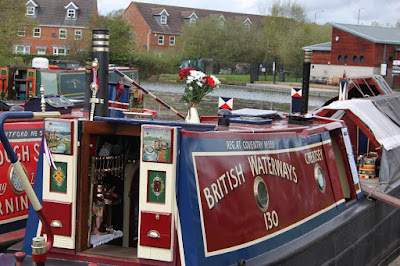 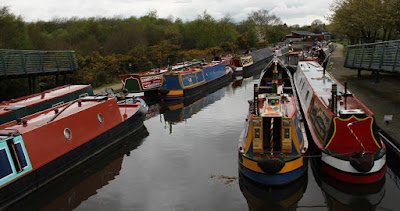 There was a small parade on the Saturday, and plenty of other boat movements as those who just couldn't get enough BCN goodness set off for Chasewater, or the Cannock Extension.

Here are Aldgate and Renfrew winding in preparation for a jaunt to Chasewater.

The local Brownhills Bob blog was appreciative, and posted a nice montage of photos (in which Chertsey features quite heavily. Another roving photographer, Roger Dutton, sent me this photo he took of Jim putting a final polish on the paintwork: 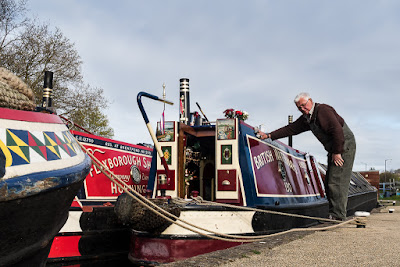 My, that really brings out the wavy cabin sides - that's a historic (early eighties) steel skin on a rebuilt (late seventies) wooden cabin, and no, I'm not going to have it all cut off and a perfect replica 1937 one made in solid steel!

On the other side of the canal from the road, Tesco's and the high street were the extensive woods and common land. We took Ricky for a walk there and were immensely impressed with it. And we were amazed, on our return at dusk, to meet at least half a dozen red deer: 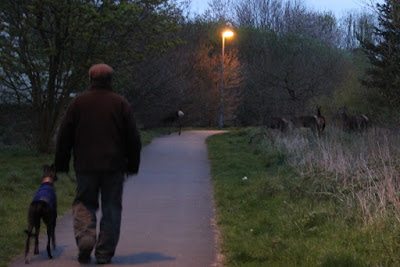 It was too dark to get a decent photo, but this is at least evidence! The whire dot on the left of the path is one deer's bum, and there are three or four others to the right. Apparently ther are very common, crossing from nearby Clayhanger Common and Cannock Chase. Even when Ricky barked (as he was bound to do) they only retreated a few feet. They were much bigger than the (fallow?) deer I have seen up here and it was a most impressive and magical sight.