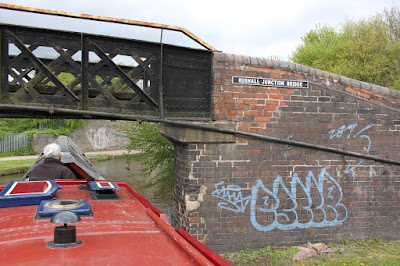 Having survived the Tame Valley, the next challenge was to be the Rushall - you definitely don't want to stop on there, we were told. Well, to be honest, it would have taken some feat of timing if we had, given that it's only two and three quarter miles long. Again though, no trouble at all, and it hasn't really stuck in the memory either. The main note in the log is of seeing the second dead Canada goose of the trip - but someone pointed out later that this might be nothing to do with the nature of the waterway, but more about the rather competitive time of year. We saw a dead duck on the lockside at Glascote on the way back too. 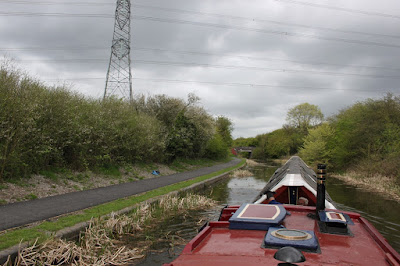 The main problem with the Rushall was this was a bit, well, rushy. Lots of cut reeds in the water which was of course pretty shallow. 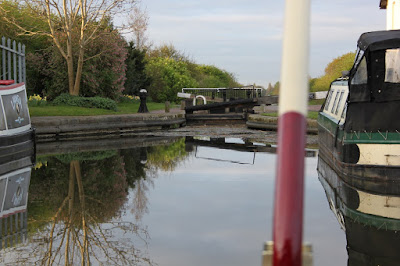 Here is an otherwise unremarkable photo showing that there are indeed some locks.

We stopped above Rushall locks at Longwood Boat Club and in the morning I was delighted to see the Jam Butty (whose name is actually Montgomery) - the amalgam of a pre-existing modern butty stern end with a fore end made of iron BCN boat to make a really cute butty that fits in a lock behind the 42' Wand'ring Bark. Captain Ahab's posts on how she came into being can hopefully be found here. 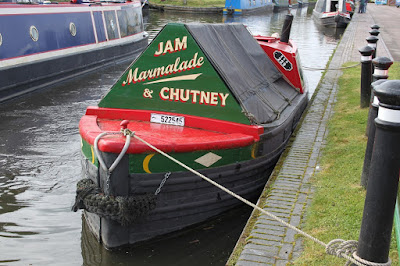 My small part in her creation came about because Chertsey was moored at Stretton at the time, and Montgomery's rear end was on display to the world, craned out of the way on top of a Portacabin at the yard. Keith Ball had built Montgomery as a butty in the nineties, had then taken it back in part exchange, cut the stern end off and converted it to a motor boat which was then sold. The Captain saw the stern as he passed the yard and asked me about it... I introduced the idea of creating what was to become the Jam Butty to Keith (who liked the idea, and was the first to call it that)... Andy got in touch with Keith, and a little star was born. And this was the first time I had seen the finished article, many years later.