The text that should have been with the last post 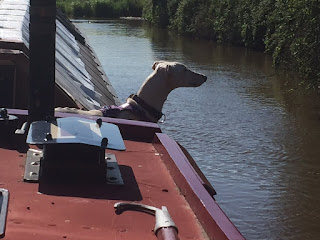 I obviously haven't quite got the hang of this email posting lark.

I tested out Paul's Waterway Routes map on the Samsung tablet purchased for the purpose. Jim was as impressed with it as I had been. As you can see, we made sure to have paper charts as well. I quickly came to rely on the Memory Map version and missed it when Jim took it away for a play. I particularly liked being able to monitor our speed. It's interesting to see how much the speed varies with no change in revs. There was much jubilation when we finally hit 3 mph for a few seconds (not least from the boat behind us, I suspect.

The main reason we were so slow was a distinct lack of water, especially from the bottom of Atherstone as far up as lock 4. I was getting stuck on the bottom part way into the lock at at least two. From lock 5 volunteers were letting water down. One possible reason they suggested is that 'they' (whoever they are in this case) stopped pumping from Mancetter quarry last week. The above photo is from before it got bad. It was about eight inches down at Alvecote and a foot at the bottom of the locks.

It has been quite windy too which never helps. Tomorrow is forecast to rain - boo - but with Saturday forecast to be really windy we're going to go for it tomorrow.

This was Geoffrey's first boat trip and he was very good, and seemed to enjoy it. Better then Ricky really, in that he just sat sat down and waited patiently at locks whereas Ricky barks, and Geoffrey also went inside and settled down while we were going along, which Ricky never does.
Posted by Sarah at 19:21