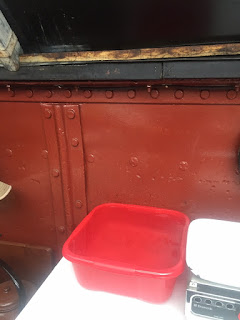 It's remarkably dry in the hull under the cloths. The only ingress of water that has bothered us lately has come in through the joints in the gunnels. There were maybe half a dozen spots where we had to leave basins in the recent heavy rain. Fortunately, I selected the washing up bowl for this one. Left it on Sunday and came back on Friday to find it full to the brim - but not quite overflowing. After winding on Saturday morning Jim was able to get some Sikaflex into the joints, and a downpour on Saturday evening put them to the test - and not a drop came in the ones he'd done (the other side of the boat is still to do). Chertsey's gunnels are butt jointed rather than scarfed, which I chose for reasons both of cost and authenticity - and because scarfing felt like overkill whatever the MCA might think - and this makes me glad I did, because if they were scarfed the water would have been getting in and eventually rotting them instead of running right through.

There's still water getting into the cabin, though, on a small scale. There's a drip below the bullseye which we have always assumed was getting in through the bullseye somehow, although Jim has sealed it in every way imaginable, including taking it all apart and bedding in in silicone. And there's water running down the outside of the stovepipe. The inside is bone dry, as I discovered when I cleaned it out today. Again, the boss connecting it through the cabintop seems to be thoroughly sealed on the outside. Bearing in mind that what I have is is a wooden cabin, built of oak planks and probably skinned in Masonite or some similar board, and only later skinned in steel (because it leaked), I'm starting to think that the water could be getting in anywhere (not that there are (m)any possibilities that I can see), unrelated to where it's actually dripping out. Parts of the oak of the ceiling are a bit rotten, foreward of the bullseye, but as it's oak it's a slow process. I'd like to be able to stop it, but it doesn't feel like it justifies doing anything too drastic - and we seem to have exhausted the non-drastic options, unless anyone else has any ideas.

By the way, thanks for the beer Halfie - we were down at the chandlers!
Posted by Sarah at 22:02