Walking a canal that doesn't yet exist 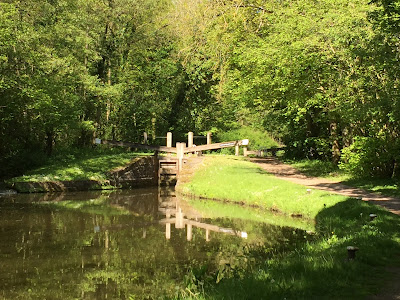 Well, up to a point. On Thursday I walked along a stretch of canal that does, most definitely exist, even if it's a while - very nearly ten years, in fact - since I managed to visit it by boat. Thanks to Paul, I then continued to discover bits of canal that are not navigable, but soon will be again, and even more excitingly, just about trace where there has never previously been canal, but soon will be.

Yes, we were on the Chesterfield. I met Paul at Sheffield station and we caught the train to Shireoaks, where we quickly found our way onto the towpath. Paul had brough along a Samsung tablet with his maps on for me to try out, to get feedback from someone 'who's not good with maps.' On the other hand, I'm not bad with satnav, which is how I was using the Waterway Routes maps with the Memory Map app. I can report that I found it very easy and pretty intuitive to use, and its benefits are not so much in the course of navigation (although this does come into its own when following a canal that doesn't yet exist - and for which the map exists only because Paul has made it) but the things you can do with the data afterwards. But I'm getting things out of their correct chronological sequence, so I'll come back to that later.
Posted by Sarah at 06:00