Four ways to have a pint - and a handful of gravy

Today I took advantage of Jim's presence, and the 740 estate, to collect something that I bought a month or so ago (and to make a couple of other purchases while I was there). The item in question needed to be collected from Church Stretton in Shropshire - somewhere I had heard of, but never been near. In fact, the whole of Shropshire is a bit of a mystery to me. The Shropshire Union canal was our base for a while, and was where Warrior started from when we first bought it, but that was in Cheshire and Staffordshire - we somehow skipped the Shropshire bit. I did go on a school trip to Ironbridge, with the bonus - only realised decades later - of also visiting the Shropshire tub boat canal and the Hay Inclined Plane, and that basically forms the entirety of my experience of the county.

So we set off today on a road trip. We chose the shortest (106 miles) but slowest route, eschewing the M1 and the M6 toll for the A53 and the A49 and a glorious run through the Peak District and Cheshire hills. It took nigh on three hours each way, but the journey was a joy in its own right. Acting like a proper grown up, I did some prior research and found somewhere for us to have lunch - the Old Coppers Malt House pub, which proved to be a good choice. We had the dog-friendly bar to ourselves, and - this is a first - I was given the choice of having my beer served four different ways. I could have it as it came with a sparkler, or pulled through extra hops (and was given a generous taste of each to help me decide), and when I said, actually, could I just have it as it came without the sparkler, I was asked if I'd like it on gravity straight from the barrel. I said I wouldn't put him to the trouble, but he had genuinely meant it. I get the impression that this is an establishment that has only recently turned itself around, and the care and genuine commitment to having happy customers must be a big part of this. Good beer and impressive food help too. I had a home made steak and ale pie - because this had had some good reviews on Tripadvisor - and it was really excellent, with proper shortcrust pastry top and bottom, and beef that was apparently cooked for nine hours in Reverend James bitter, and nice chips too. It came with extra gravy (which I never really want), but I knew someone who did... 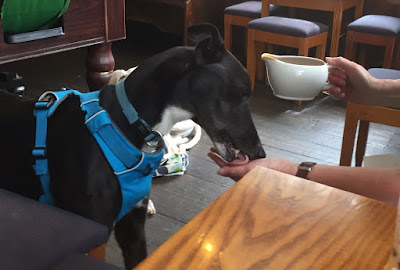 Obviously we didn't have a dish or anything with us, so I had to improvise. I think it was appreciated.
Posted by Sarah at 06:00