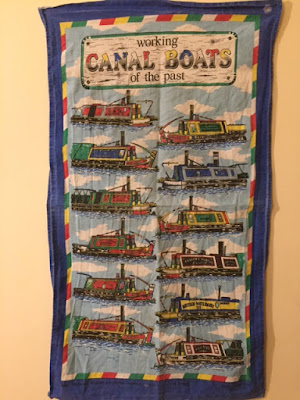 Souvenir tea towels sometimes seem to be viewed as a bit naff, but to me, they're the perfect souvenir: inexpensive, useful, and because you actually use them (but aren't looking at the same one every day) a real reminder of the place and time you got them.

Having said that, I don't have many; only two in fact that are genuine souvenirs that I have bought myself. But never let it be said that I am shy about exposing my life to the view of the internet: tonight I am going to talk about all my tea towels. And even the drawer where I keep them. 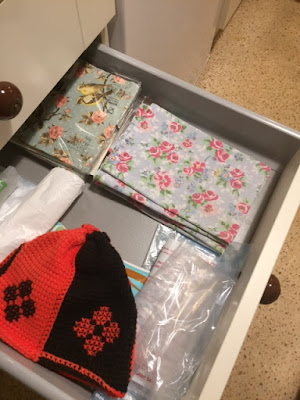 The one at the top, 'Working Canal Boats of the Past' was a present from our former next door neighbour in Newhaven. I don't know where they got it from, although I believe they could be purchased from the Stoke Bruerne Museum, at least. It shows a variety of different kinds of boat, fairly faithfully rendered, although not necessarily with due regard to the accuracy of their naming and/or numbering. Unless Chiswick has at some point been Henry, which I'm pretty sure it hasn't.

In the drawer you see my two Wilko sub-Kath Kidson floral tea towels. There was a third in the set, with a pink gingham design, but I took that to Newhaven at Christmas and donated it to Jim. Other people always seem to be short of tea towels; I'm not quite sure why. Nor why other people's tea towels so often mysteriously smell of sour milk. But I digress. 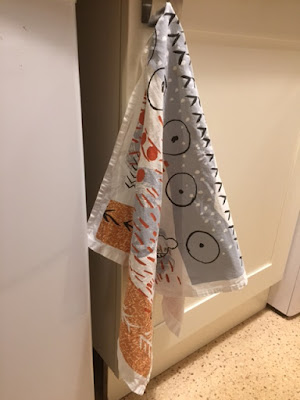 This is the tea towel I am currently using. It was in my mother's house, although it was pretty much unused and I have no idea where she got it from. It's from the shop at the National Gallery, and appears to feature rather crude drawings of fish, some of which are oddly phallic (and may not, in fact, be fish). 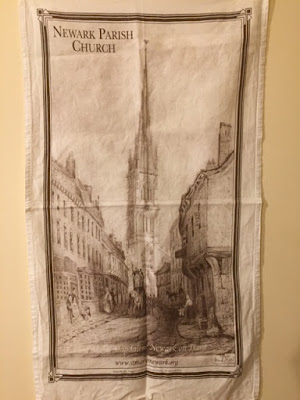 And so we come to the genuine souvenirs. Had I known I was going to blu-tack them to the wall and photograph them for the blog, I would have ironed them. But I am nothing if not spontaneous (and I'm not actually that spontaneous, more desperate, with a blog to fill and the snooker starting in ten minutes). This one is Newark, purchased the day we went up the tower of the featured church, and looked down upon the marketplace. Sadly, I posted about it using Blogpress, eater of photos. Nonetheless, the blog tells me that this tea towel will be ten years old in August. What excellent value that represents! 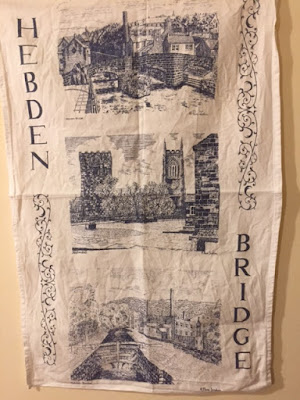 Next we have the delightfully illustrated souvenir of my day trip to Hebden Bridge in 2014.

And I would have finished there, but I remembered that I have one last souvenir tea towel, which actually does duty as the hand towel in the downstairs loo, where it complements the (genuine) BR mirror, one of my few, and probably my best, Ebay purchases. The towel also serves as a reminder of the trips I made to York whilst externalling there (I still do, but I fear my term will be up before they spring for any more trips to the Railway Museum). 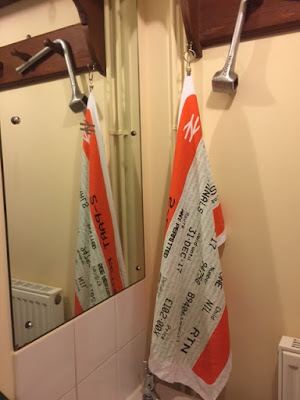