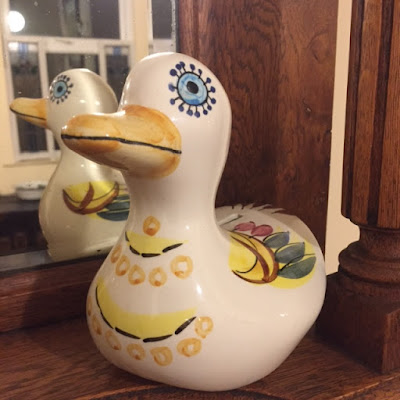 We've had posts about ducks before. But not this duck. This was my sister's childhood money box. I had a more traditional pig; it was fat and white with blue flowers on it. It broke. In my defence I will say that it remained almost intact into adulthood, but it was one of those where the only way to get the money out was the same way it went in, which entailed quite a lot of bashing of coins against the not-very-high-quality china, which eventually took its toll.

The duck, on the other hand, had a plug (now missing) in its underside. Also, my sister was never much of a saver.  The piggy was quite traditional; the duck is gloriously seventies. Of all the things I've inherited from my sister, this is one of the ones that gives me the greatest pleasure.

I had a piggy bank, so logically of course my sister had a ducky bank. However, this always came out instead as piggy duck. Just as when, on our school sports day, when we had to balance tubers on our flatware* rather than the potentially more messy traditional alternative, this was known as the egg and potato race.

*Because in Sheffield, only knives are cutlery.