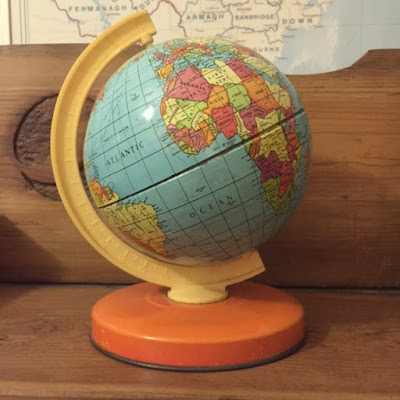 Another childhood object, this time something on mine which has survived more or less intact - a cheap tin globe that I am inordinately fond of. I do recall my father trying to teach me a bit of geography on it, and being amazed by the tinyness of England. It seems so big when you're actually living in it, especially as a four year old.

Photographing it for, probably, the first time in its fifty-year existence, I notice that when looked at in close-up, there's something a bit odd about Scotcland: 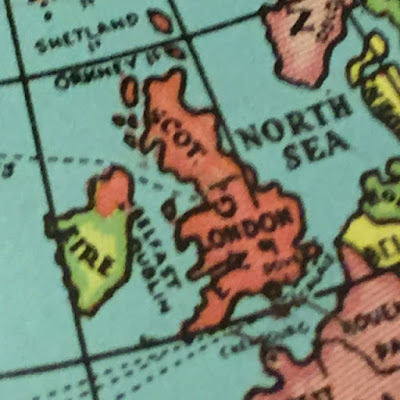 Not to mention that the whole of the Midlands - nay, of England, and, indeed, Wales - is called London. And I never noticed that before.

The globe is held in its plastic frame (I bet that thing must have a name) by little plastic lugs. Or it was. Very early on, the lower lug broke off. This was repaired by my father using a technique he deployed in a variety of situations: 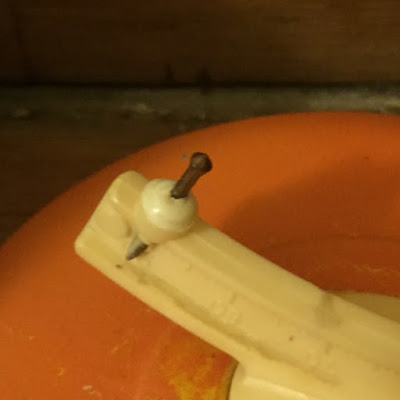 By holding a nail, using pliers, in the flame of the gas cooker until it was red hot, then sticking it into the plastic that melted around it. This must actually have required a pretty steady hand. The same technique was used to make holes in yogurt pots to turn them into plant pots. It got quite fumey when he was on a roll. The gas flame would also be used to sterilise a needle (never a pin) for the removal of splinters from fingers. I still have a number of needles turned blue by this (because I do the same thing, not because I have very old needles).