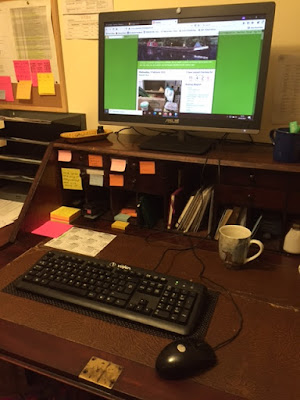 I suppose even calling it that shows my age; an age to have had a BBC Micro  in the corner of the maths teacher's prefab classroom, when they'd seen that computers were the future, but thought that we'd all need to be able to programme them. Which is one of those things that seems very odd in hindsight.

I'm confused also because I see that the BBC Micro only came out in December 1981, by which time I had left secondary school for sixth form, so it must have been something even earlier and more radical that Mr Amor's spotty protegees wafted their testosterone over.

So that must have been my first sight of 'a computer'. I don't recall having much to do with them for another decade. My first husband brought a dowry of a Dragon 32, which he would plug into the TV and play games on, until the fateful day when No. 1 son toddled over and threw up across the keyboard. The screen turned green and that was that.

Fast forward to 1992, when in order to be a more efficient constituency secretary and PPC's casework officer (working out of a freezing empty shop in Lewes High Street), I took a word processing course and splashed out on an Amstrad PCW 256. That served me well for many years. I did my first degree on it, and most of my MA, and didn't replace it until around 1998, when I started my PhD and began teaching, and decided I needed to enter the world of the Internet (note that capital). It would have been around now I sent my first email. I which I could remember who it was to and what it was about. It was definitely around the time I started teaching, and might have been something to do with my hourly paid contract. At Sussex then we used Netscape Navigator and Pegasus Mail.

So we bought a second hand 386 machine to use at home; I can't remember the make. And to get our dial up internet we went to the service provider (Mistral)'s office in Brighton to sign up. Because how else would you?

I think we might have upgraded once in the intervening years, but the next computer I remember getting was in 2005. The University of Huddersfield were participating in something called the Home Computing Initiative whereby you could use salary sacrifice to tax-efficiently buy a computer to use at home. This was a government scheme to improve the computer literacy of the workforce, apparently. It ended only fifteen years ago, but still sounds like something from another era. Anyway, that Viglen was by far the most powerful computer I'd ever had, and I used it until I moved to Sheffield in 2012, including installing it on Bakewell for the year we lived aboard. I have just retrieved it from Newhaven, and it's currently in my attic, waiting for me to decide what to do with it (if I can remember my password) 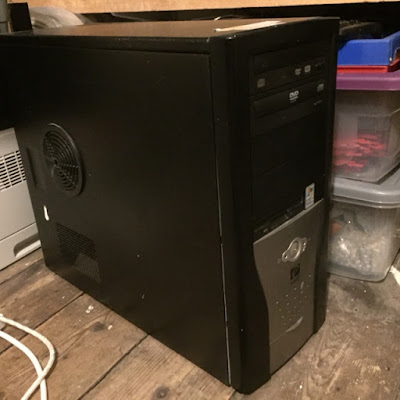 For a few years after moving to Sheffield I didn't bother with a computer at home - I had everything I needed in my lovely office at work. Then we moved into open plan and suddenly I needed to work at home. First I bought a laptop, but I found that I'm really not comfortable working on one. I bought a second hand monitor, and added a mouse and keyboard, but it was all getting a bit messy in my limited space. So I had another go and bought the Asus all-in one (which you can see at the top of the page) that I'm using now, which has been great. I hope it'll serve my needs for a few more years yet.