Where the streets have no plastic windows 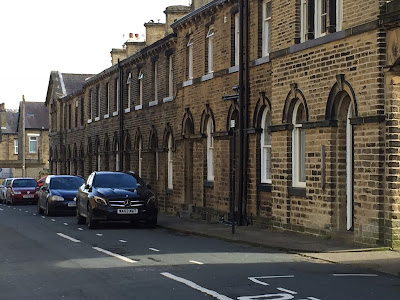 A fairly typical street in Saltaire. Saltaire is, in many ways, an odd place; odd in ways you can't quite put your finger on - and this is one of them. There are no uPVC double glazed windows. Not all the houses have their original windows - I would guess very few; not all the houses have windows in the original style. But there's no plastic.

But Saltaire is a very old conservation area. Conservation areas were introduced under the Civic Amenities Act of 1967, and Saltaire was designated one in 1971 (Stamford in Lincolnshire - which is another of the Big Towns on my list - was the first). Whilst it feels as if uPVC windows have always been with us, they didn't in fact gain traction in Britain until the early 1980s. So there were none to be frozen into Saltaire's street scenes.

In 2014, the Bradford Telegraph and Argus reported a council crackdown on 'rogue doors', helpfully printing the addresses of the four offenders, presumably so that people could go and give them deprecating looks. I didn't take note of this before I went, otherwise I could have checked and reported back on whether the threats of enforcement action had been carried through. One of them was in Fanny Street. As most of the streets in Saltaire are named after members of Sir Titus' family (including himself), that's not so remarkable (she was one of his daughters), but I bet people seeking a desirable residence in Saltaire would, given the choice, rather live in any one of the other roads. Shallow and puerile it may be, but when I was looking at houses recently, if all other things had been equal I'd have paid a couple of thousand more to live in Industry Street or Freedom Road rather than spend the rest of my life giving my address as Cundy Street (as it turned out I ended up with none of these, which are all roads in the Walkley district of Sheffield).

I got the information about uPVC windows from the website of the British Plastics Federation, whose 'History of Windows' (admirably potted into a few paragraphs) also tells us that 'building down to a price rather than up to a standard post-Second World War lead [sic] to little of architectural merit in fenestration.'


Other sources:
Historic England
Posted by Sarah at 18:13