The Venice of the West Riding

According to Wikipedia, nearly forty places in northern Europe have at one time or another been called The Venice of the North. The main qualification for being likened to that unique city seems to be some buildings, and the presence of some water, and English pretenders to the title include Paddington and Birmingham. 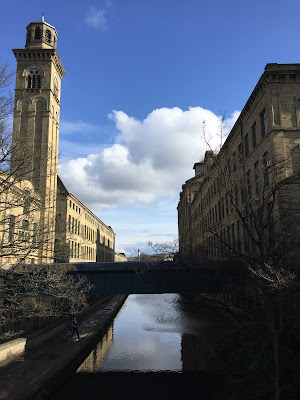 Well, as that's not much in the way of competition, I would like to nominate Saltaire for the title. It has canals (ok, a canal and a river); it has campaniles. And it has lions. I don't think Paddington has lions. (Although it does of course have a bear.)

Saltaire's lions are lovely. There are four of them, although I only photographed two. They are called War, Peace, Determination and Vigilance, and were originally commissioned from the scuptor, Thomas Milnes of London, to go at the base of Nelson's column. Some versions of the story have Milnes's lions being rejected for being too small - and the commision went to Landseer, whose lions were indeed bigger, and bronze - but arguably not as leonine and to my eyes certainly not as characterful. Anyway, it seems that Sir Titus had had his eye on them in Milnes's studio and was more than happy to snap them up for Saltaire. 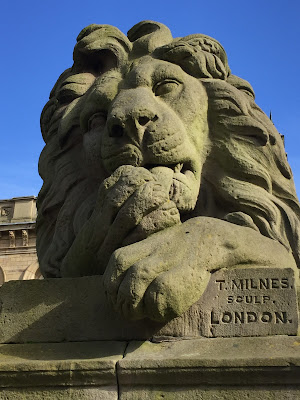 Here is Peace, enjoying a restful snack (or possibly doing his nails) outside the Victoria Hall, relaxing in the sun like all good lions should, 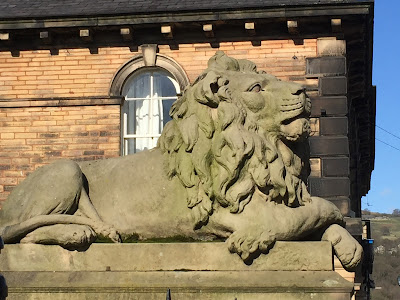 And here is Vigilance, keeping a lookout outside the former Factory School. 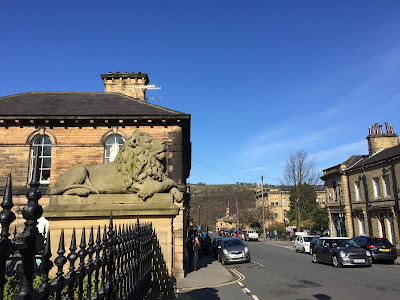 Did I mention that it was a lovely day?


Sources:
The Victorian Web
Posted by Sarah at 18:22