A Hat Trick of Taps 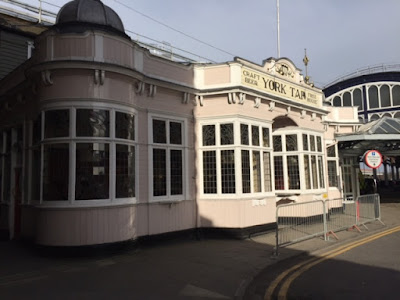 I describe here my first visit to the Sheffield Tap, and my earlier patronage of the Euston Tap - practically my local in Birkbeck days, whenever I could persuade any of the metropolitan elite to come a-drinking beer with me. But I needed one more to complete the Grand Slam of railway-related beer drinking opportunities. And thanks to someone at the University of York Googling me and thinking I might make a good External Examiner for them, I got the opportunity to plug that Tap gap last week. 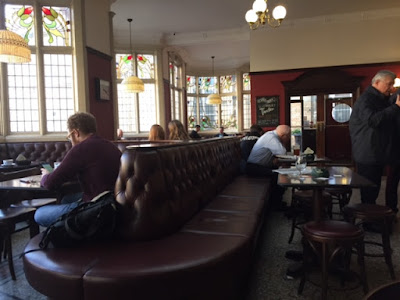 The York Tap is housed in a former Victorian tea rooms, latterly a model railway museum, from what I can tell. The interior is nice, but not anything like on the scale of wonder that is the Sheffield Tap. On the other hand, the acoustics are better. In many ways, the outside of the building is more interesting, where you can (or could, in a half decent photo) see its wooden construction. The beer is, of course, expensive, but there's a great range, tending towards the foreign and trendy, although I found a pint of Hopcraft's charmingly named We Could Tell You But We'd Have To Kill You brewed with 'secret' English hops that did, joyously, turn out to taste like English hops. 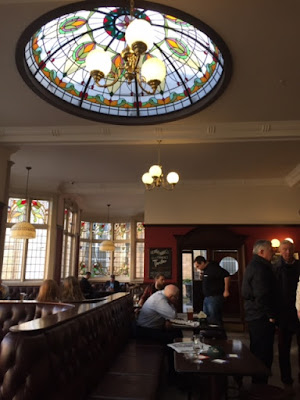 Since discovering the Sheffield Tap back in 2013, I have found a few other favourite Sheffield pubs. The Bath Hotel - handy for work - has become probably my first choice, especially for a quick after work drink. It's unpretentious and fairly basic, with a nice thirties interior that's not been gussied up, and a fair choice of beers, albeit heavily skewed towards Thornbridge. No food though. If food is required, particularly after work, then I make my way to the Red Deer, which is popular and knows it, and can get uncomfortably crowded, but does some decent food with a really good and imaginitive range of veggie and vegan choices. Again, there's a good range of beer, including usually a vegan one. Then last week I was introduced to another promising one - the Rutland Arms, down near the station. They have an unforgivably posey website, a somewhat arch menu and a degree of studied eccentricity - but the food was fine, and the range of beers good - and most impressive of all, no sparklers!