A walk in the park

On arriving in Saltaire, I first got my bearings by finding the canal. The trip boat was just leaving, but I decided against paying four quid for the half hour round trip. In fact, the boat had just left as I dithered; I considered following its route on foot, thus getting a better view (all the outside seats were taken) and saving the aforementioned four quid, but in the end I conceded that there wasn't really enough time; it being Sunday there hadn't been a sensibly early train, and I didn't arrive in the village until 11.20.
So instead I went straight to Salts Mill, where I had a brief wander around, taking in the toilets (of which more anon) and the antique shop. The National dried milk tim (with 'cotton wool' scratched into its paint) was still there - at £16, not the £12 I'd remembered - but sadly the red cut glass lamp wasn't, or I'd have had it.

My next appointment was with the Shipley Glen Tramway, which opened at 12. To find that, I took a stroll through Roberts Park (and a few unintended detours, which are par for the course when I'm navigating). This was originally Saltaire Park, built along with the village for the healthy enjoyment of the workers, but became Roberts Park in 1920, when the Roberts family donated it to the local council in memory of their son Bertram. 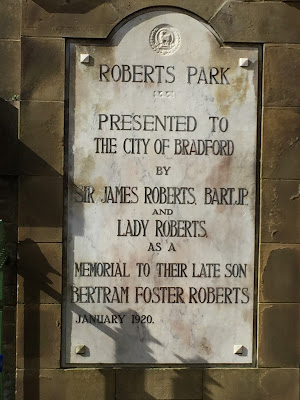 A large sign sets down the rules of the park as set down by Sir Titus Salt (sadly now superceded), which include:
There are twenty rules in all, ensuring that the residents of Saltaire enjoyed themselves in the proper fashion. 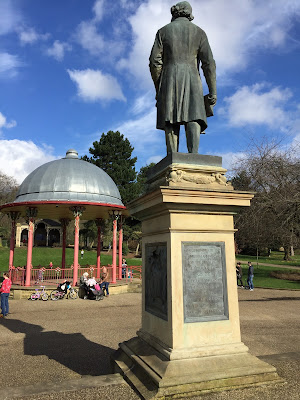 The original bandstand was long lost, but was replaced with a larger one as part of a four and a half million pound refurbishment in 2009. The statue was provided by Sir James Roberts (the same one who later handed over the park) in 1903, to mark the centenary of Salt's birth. Most pictures of it show his impressively bearded front view, in which he appears to be holding a scroll of paper modestly across his groin, but the sun was behind him, so I had to go for the less orthodox angle. He is surrounded by various sheep, goats, alpacas and other wool-bearing animals from which he made his fortune. 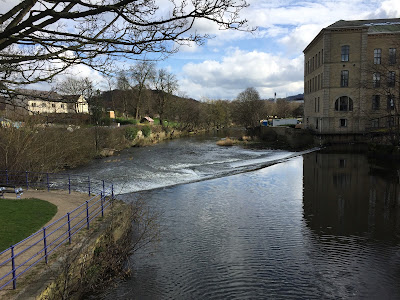 On one side the park is bounded by the River Aire, which separates it from the village and the mill. 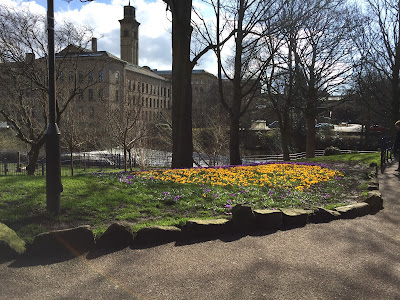 It was certainly a lovely day for it.