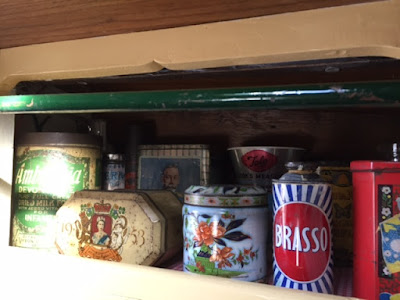 And here are the new tins, along with the old ones, on the newly refurbished shelf above the table cupboard. There is now a fiddle along the bottom to stop things falling off, and a trim along the top to make it neat and pretty.

The Brasso tin contains Brasso. The red tea caddy on the right contains clothes pegs (and once gor dropped in the Chesterfield canal and retrieved with a magnet). The Ambrosia milk tin contains spare mantles and other Tilley lamp accoutrements. The tea caddy in the middle, with the Chinese style design, contains sewing stuff, small nails and picture hooks. There's another milk tin at the back with spare toothpaste and brushes in, and the Brown and Poulsen cornflour tin holds pens and scissors. So nearly all of them are use as well as ornament. Elsewhere, there is a tobacco tin (Lloyds Skipper Brand) with all sorts of things including best old brass screws, ballbearings and Blu-Tack, but I couldn't fit that on the shelf.

Whilst in the back cabin at the weekend, I peeled the sticky backed plastic off the newly refitted table cupboard. It had been slightly damaged, but worse, had shrunk away from the edges leaving a dirty sticky border all the way round - a shame, because I liked the fifties effect. It came off very cleanly though, without damaging the paint, and I cleaned round the edges with white spirit. I probably won't replace it as it would only shrink again. I think I still have just about enough left over though to cover the new section of shelf inside the table cupboard.
Posted by Sarah at 19:00