And so to the Glen Tramway, Shipley's premier visitor attraction (if you don't count Saltaire, which I suspect the residents would prefer to categorise as a separate place); a small thing, with a long history, and, it seems, two competing websites - beware, only the latter is approved by the Trustees! 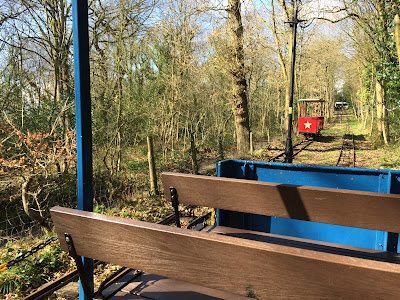 The Tramway was opened in 1895, to carry visitors up the hill to what was then a very popular spot for picnicking and promenading - only the steep ascent deterred people. Initially the fare was 1d each way, but people were inclined(!) to take the tram up and walk down, which meant the tram cars were unbalanced and this put additional wear on the mechanism, so the downhill fare was reduced to a halfpenny. It doesn't appear to be recorded whether this had the desired effect. The fare is now a very reasonable £1 each way, or £2 for unlimited travel for a day (I think you would get your full entertainment value out of this quite quickly). 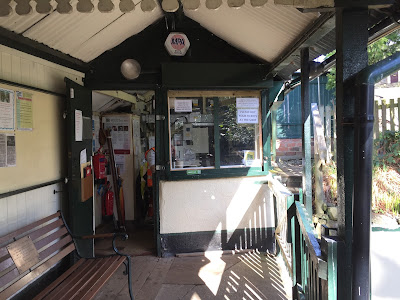 The tram car is hauled up the hill on a rope made of steel with a hemp core, winding round a drum under the floor of the Top Station, from where the 'driver' controls it. Since an almost nasty accident in 1966 in which someone hurt their ankle, caused by the driver feeling peculiar and stepping out for some air, the controls have been fitted with a dead man's handle, and buffers installed at the bottom, so you can ride with confidence.

The motive power was originally provided by a gas engine supplied by John Robson of Shipley. The proprieters of Saltaire would not allow mains town gas to be piped across the park to the tramway, so it had its own gas plant for a number of years. Eventually it was supplied from the gasholder at Saltaire, but in 1915 was converted to run on oil - probably paraffin (hooray! It's a long time since that's had a mention on the blog). This was relatively short-lived, with an electric motor being installed in 1928, lasting for nearly forty years until it was irreparably damaged by vandalism and theft during one of the Tramway's very few and brief periods of disuse in 1967. It now has a new electric motor. 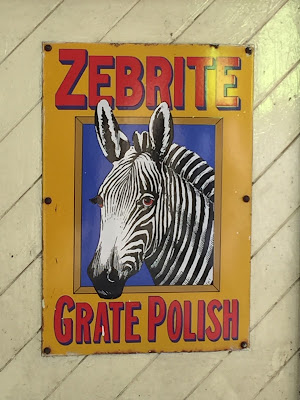 I eventually found the Bottom Station after a few fruitless detours through the car parks of Shipley. There's a small 'museum' here - basically a nice little collection of old tins and adverts in a shop setting. Passengers were outnumbered by volunteers when I arrived and I rode up the hill (top photo) almost alone (and I think the other three passengers were all volunteers).

There is not much to do at the top, other than go down. You can buy sweets in the shop, or make a selection from some rather sad looking postcards 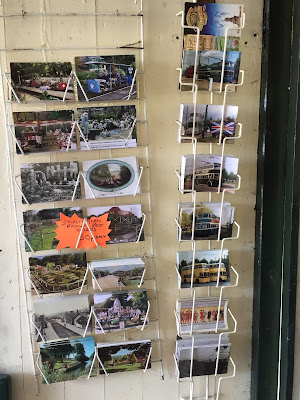 Or you can promenade. I had planned to eat my lunch at the top, and so I did, but there was nowhere to sit (I had hoped at least for a bench) so I ate it standing up. Once a decent period had elapsed (about five minutes) I headed back to the station for the down hill journey. 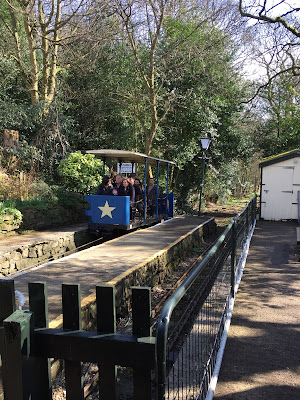 Crowds of passengers had suddenly appeared, and on the way back down, the tram was full. In the shop I purchased, for £2, a copy of The Shipley Glen Tramway: Its Social History Since 1895 and its Mechanics by M.J. Leak (a former owner of the Tramway), first published in 2003, from where the information in this post was gleaned.

If you're in Saltaire, and especially if you have children to entertain, it can't hurt to go and have a ride. If you're a fan of historic funicular railways, you're probably already a volunteer.