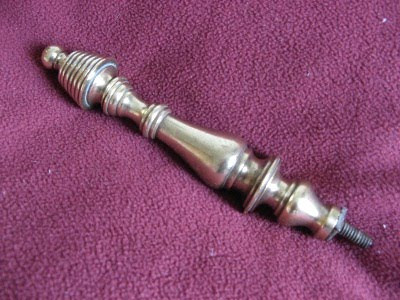 For those of you who haven't seen Warrior's, here is what will become Chertsey's tiller pin. It's one of a pair that we bought from Malcolm Braine at the Ellesmere Port boat jumble a few years ago, along with other treasures including four brass handrails (now towel rails etc), some step edging (nicely finishing Warrior's engine room side hatches) and some handy brass screw-in eyes.

A pair of what? Well, I don't know. Although it looks like the traditional poker handle, when finished as a tiller pin, it actually isn't, and it's quite a job to turn it into one. In fact it's in two or three pieces, on a threaded rod, held on with a nut at the end. The threaded rod has to be removed and replaced, ironically, with a piece from a poker. So any suggestions very welcome.

I dug this out of the bureau this morning, where it's been sitting for years waiting to be cleaned of decades of tarnish. Well, I can thoroughly recommend Viakal bathroom cleaner for such situations. A few sprays, a brief soak and a gentle rub with a non-stick pan scourer and the worst of the tarnish was gone and it was ready for the Brasso. With regular polishing over the coming years it should get better still. As Viakal is sold as a limescale remover I was pretty confident it would be acidic enough to do the trick. It certainly worked better than vinegar. I've never tried coca cola (for the phosphoric acid) as I never seem to have any to hand at the time, but I've heard that works too.

I tried Chertsey's tiller out for size the other week. Well, I know I like a long one, but this only left about a foot of hatch space for me to stand in. I could see why the step had been extended deeper into the cabin, but unfortunately this had to be cut back to fit the stove, so using the tiller as it is leaves me teetering on the edge. On the upside, it means that no one fatter than me could steer it at all. I may well have another step put on top of the existing one anyway, to give me a few extra inches height (Hampstead has one like this and I found it most agreeable) so maybe that could be extended back in again above the level of the oven door. Alternatively I could take a few inches off the tiller, but I do baulk at that. It's such a nice tiller too.
Posted by Sarah at 18:47