Toys for the girls too! 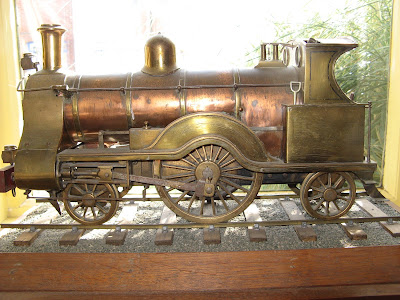 Blossom has been playing with a Mamod traction engine today, and that put it into my head that I could write about this model engine, which was given to my father when he finally retired from his post-retirement voluntary position at the British Engineerium Steam Museum (closed), where he used to do the books, take school parties round (German speakers a speciality) and stoke the boilers on high days and holidays.

I posted about this on CWF a while back, in a thread about cleaning copper and brass, as a dire warning about the dangers of using too abrasive cleaners (as per No. 1 husband). However, then engine itself generated much more interest than the state of its patina, with lively debate as to what it was a model of (conclusion: a generic loco) and whether it was built as a working model. Well - perhaps strangely - this last thought had never occurred to me, but I turned it upside down and had a poke about in its innards (the model, not the thought), and it looks as if it very likely was, although it would appear to have at least one vital part (the bottom of the firebox) missing. There are some more photos here if you would like to have a look for yourself. And Blossom, if you'd like a go at firing it up, I'm sure it could be arranged.

When I was little, I had a lovely train set. In fact, I still have it, and I will get it out soon, and write about it, and get it all ready for Eloise to play with when she's bigger. It had a wonderful station, that my father made; a yellow loco, two trucks (one red and one green) and a green tipping hopper thing that I suppose with hindsight must have been for the coal. It ran on red rails with I guess about a 2" guage, and had two things that you could set to either stop the engine (by flicking its switch off) or allow it to pass. It was extremely unrealistic but I derived enormous pleasure from it; in fact it must have been my favourite toy. I would have the station at one stop, and my model farm at the other, and the little plastic animals, the shepherd and the scarecrow (and a gorilla, if I was running short) would be the passengers.
Posted by Sarah at 19:26