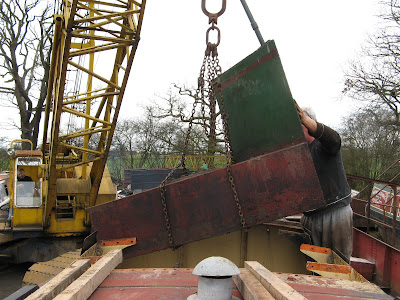 What were we going to pull out of the bran tub today? How about a couple of fuel tanks - probably the toughest job yet, not helped by the fact that one of the tanks (although strangely not the other, despite them apparently being linked by a balancing pipe) was a good foot deep in diesel (probably about 1979 vintage).

Grand Union tanks are also rather iceberg-like. What you can see is a triangular box in each of the foreward corners of the engine room; what you can't see, until you take the floor up, is the foot deep coffin shaped tanks that extend back as far as the rear bulkhead. Now, these do come out. In fact, they must be intended to come out, and have come out, in the past as one of them is marked 'Chertsey'. But they do not come out with much room to spare.

First thing we had to do was close the cock on each tank and remove the balance pipe. Then we had to disconnect the breathers that go through the foreward bulkhead on each side. Now who forgot to bring the BSP spanners? OK, that accomplished with he trusty slip-jointed pliers (now there's a miracle of design). One further hitch was that at some point in the recent past, a vey nice, robust, external filler had been fitted. Normally, you'd fill your G.U. tanks via a hole in the top of the triangular bit, through the side hatches; for some reason this had been adapted to fill from the outside with a big solid pipe bolted onto the top of the right hand tank. To undo this we needed a 1/4" Whitworth spanner (remember this; it's significant) which we didn't have. After trying everything else in the box, Jim made one by grinding down a crappy old one and got the flange off. He then 'horsed' the tank from under the filler pipe, but it failed to clear it by about half an inch. At this point it was decided that I would be much better off reverting to the traditional method of oiling up, and the hefty pipe was ground off (outer trip hazard filler cap and surround to follow). 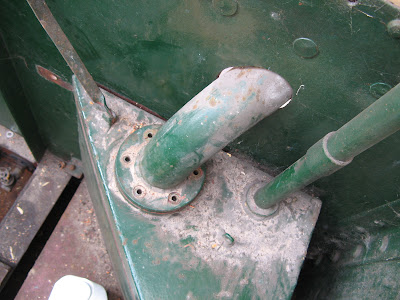 The first tank had already come out at this stage, despite my standing over affairs like Cassandra and asserting that it was impossible. First of all it had to be levelled, then rotated, then finally it could come out, its narrowest point just fitting neatly through the gap lest by the hatches. The second one, once freed of the filler pipe, was easier, being unexpectedly empty, so it wasn't sloshing about, and keeping it level wasn't so critical. There was surprisingly little old crap underneath, but one thing that was revealed when the tank was removed was... a 1/4" Whitworth spanner.

All in all then, another excellent day's work. Plus I put some potatoes in the oven at quarter to eight this morning and they were ready in time for lunch, and at suppertime I successfully fried some bacon.
Posted by Sarah at 19:38