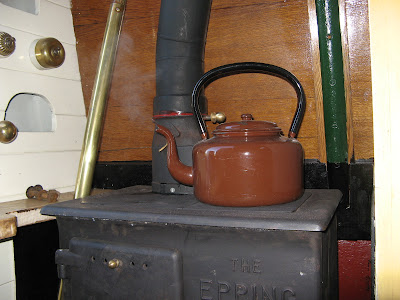 In an hour or so we're leaving for Stretton, so in the (obviously terrible) event of me going quiet, you must conclude that the laptop has forgotten how to communicate with my phone. Hopefully though I'll be blogging tonight and there should be plenty to blog about!

Evening update
Well, it does seem to be working. Hooray! It's been a very rewarding day. We stopped off n the way to see (and hear) the 'new' engine - a rebuilt Petter McLaren PD2 which has done less that 200 hours since its rebuild, and has been extensively checked over and refurbished since, including being painted, so it looks like new - and strangely, painted nearly the same colour as Warrior's engine. So that's a definite purchase. Next we arrived at Stretton to see what work had been done, and though I've been receiving regular bulletins there were still a few (lovely) surprises in terms of the progress that has been made. Least significant in the staying afloat stakes, but most instantly gratifying, the Epping stove was not only installed, but lit, and the cabin was already so warm and welcoming. So the first thing I did was get my lovely brown enamel kettle out and make a cup of tea. Then I had a bit of a tidy up and put all my bits away, and made up the bed with a cover at last on the foam mattress and my indulgence, another new goose feather and down quilt. I had one on Andante, but Baz has appropriated it and refuses to give it back, so I had to get a new one. What luxury!