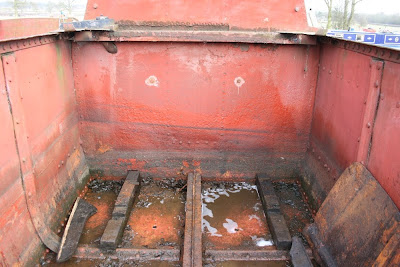 Well, people often say that a boat is a bottomless pit into which you pour money, when of course what we all really want is a pitless bottom. I prefer to see it as a hobby, and compare my capital expenditure against the revenue expenditure of, say, a golfer, oh, all right, someone whose hobby is going on expensive foreign holidays.

Anyway, back to the subject of my bottom, or rather, Chertsey's. I got a text from Keith last week saying that he wanted to cut holes out of Chertsey's bottom plate (you will recall that we have taken it out of the water....) in order to assess the thickness of what's left of the original plating, and also to let the rainwater drain out now it's on land. It seemed a very counter-intuitive thing to do, but of course I agreed and so he went ahead and cut out two holes, each the size of an old penny, one either side of the keelson towards the back end of the hold - first having removed the (replica) josher fuel tank that had been installed there (so if anyone needs one, you know who to ask... sorry it was a bit late for you Dove). 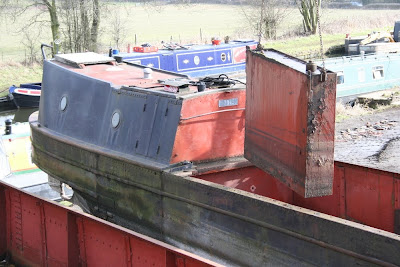 At some point (probably about 20 years ago) Chertsey was rebottomed from just foreward of here right to the very fore end in what we are now pretty sure is 12mm plate, and refooted at the same time, and though we haven't closely inspected it yet this seems to be solid and in good condition. Aft of this though it still has its original, 1930s quarter-inch plate, and it's this that was being looked at. One of the two discs cut out was ground down to the depth of its deepest pit - i.e. its thinnest point - and was measured at 3.9mm; the other came in at about 5mm. So, a loss of one or two millimetres over a period of seventy years - would make modern boat owners green with envy. It appeared to have been tarred or otherwise blacked on the bottom, and red leaded on the inside, which must have helped. 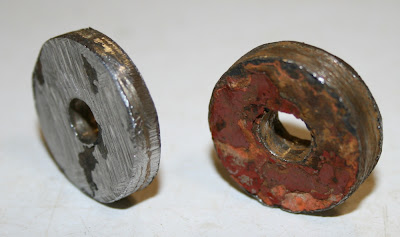 The time has come, however, when we need to do something about it, and that something - for reasons of both cost, and what I like to think of as archeological integrity - will be overplating. While there's life in this plating yet, the bottom does need immediate attention because of the state of the chines, of which more tomorrow.
Posted by Sarah at 13:07