I do like a nice charity shop, and have had some lovely finds over the years (and sent a lot of stuff in their direction too), so when Dean and Roger came to tea yesterday, and I met them off the train, and they asked if there were any charity shops in Newhaven, I eagerly told them that there were three, and that I would gladly show them these highspots of the town. So off we went first to the PDSA shop, which is a bit dear by Newhaven standards, and smells rather peculiarly of some very strong air freshener, where they were delighted with some CDs and various other treasures, and I had to borrow a fiver off Dean to buy a new patchwork hippy dress, just like my old one, only predominantly blue rather than pink and less tatty (I said it was dear, didn't I).

Then we went to Sense, which is generally pretty good but has recently taken to stocking large pieces of furniture. Here I resisted a set of Woods Berol ware cups and saucers, and Dean and Roger resisted a Dartmouth fish vase but were delighted to find a video that they had been after for a while.

Then off to the final one, my favourite, Help the Aged, where only last week I was enjoying my regular chat with the manager amongst the well stocked shelves and racks, and... it was gone! 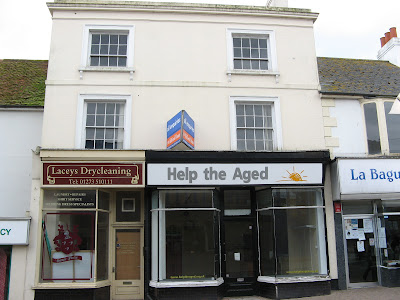 Not just closed, but empty and stripped out. Just like that, no notice, no warning. I can't believe that Sue the manager could have known last week or she surely would have said. That was quite a shock, and very disappointing too. So we had to make do with just two charity shops, and the appeal of Newhaven for charity shop tourists just declined a little more. Although we have been promised a new one, from Searchlight, a local charity, but who knows whether that will come to pass. It's a bad day indeed when even the charity shops pull out.

Still, a variety of cakes and some trifle soon restored our spirits.
Posted by Sarah at 20:04