Last week, Geoffrey ran away. It was around lunchtime on the Friday; he and Ricky were helping Jim in the shop, and a customer came in and left the door open. Faster than the eye could see, Geoffrey was out and away. (Ricky, being such a good boy these days, stayed put.)

Naturally consternation ensued. I was being kept apprised of events via text, and following the updates on Facebook (public pages, no I haven't joined!) but there was very little I could do from here.

The biggest worry was that he'd get run over; the next biggest - after he'd been at large for some hours without that happening - was that he'd get out onto the Downs and either catch a sheep (we have no idea whether Geoffrey goes for sheep, or even if he knows what one is, but it's a reasonable bet), or stay out there for weeks living off the land (as I'm sure he's perfectly capable of).

With the help of Sebastian and Fiona, all sorts of groups and mechanisms sprung into action, including a group of people who use their drones to search for lost pets. It was amazing the goodwill that poured forth from total strangers. There were many sightings, but no one got close enough to catch him. Night fell, and bedtime came, and still he was missing. At least that Friday night was mild, but colder weather was forecast imminently, which was an added worry.

However, on the Saturday morning, Jim got a phone call - Geoffrey was found, safe and well, and had successfully been detained. He'd got as far as the edge of the Downs, and leapt a very high fence to get into someone's garden. Once in, it seems he couldn't get the run up to get out again, so there he stayed. When the householders let their dog out in the morning, in strolled Geoffrey, none the worse for the experience.

He was very tired though.... 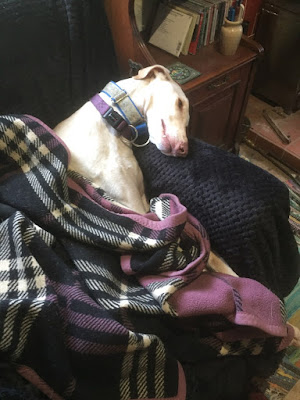 Although he was found only about five miles from the shop, Jim plotted all the sightings on a map and calculated that he'd probably travelled about ten miles altogether. 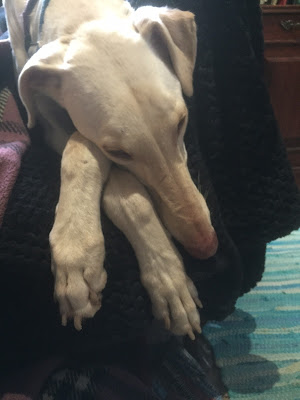 Ricky did do a runner from the shop once, but was apprehended three doors up the road eating a workman's sandwiches.
Posted by Sarah at 06:00