My second favourite Sheffield pub is another which the book puts in the inventor of historic pub exteriors, 'for pubs where the historic interior has been entirely destroyed'.

So I have taken a photo of the exterior, which apparently is little changed since 1825 (except for the bloody great mural, of course), in which you can't really see the three original etched windows. 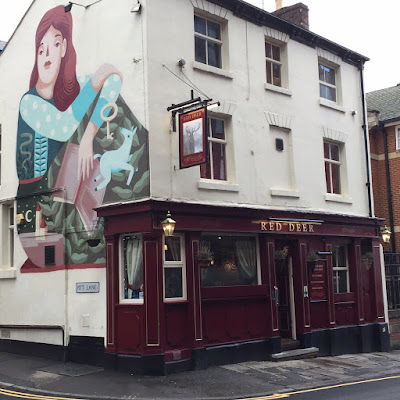 I like the Red Deer because it is reasonably near work, has decent beer and friendly staff, but above all because alone amongst my top three, it does food - and rather good food at that. Their nachos, in particular, are fabulous. Whereas many places would be happy to open a packet of Doritos and microwave a bit of cheese on the top, the Red Deer's tortilla pieces are freshly deep fried ... mmmm... They do other good stuff too, with some imaginative but not ridiculous vegan offerings. Nice spicy mini vegan haggises, battered halloumi, and, as I had on Monday, southern fried tofu with sweet potato chips. It used to have a reputation for being full of engineers, but since they've moved from nearby Mappin Street to the carbuncle manque that is the Diamond, maybe less so... They also have real fires in two of their three fireplaces. So it's a shame that those three fireplaces are now in one big room, which includes an extension, but I'm still always happy to visit the Red Deer.
Posted by Sarah at 06:00