Round the rear of Record Ridgway 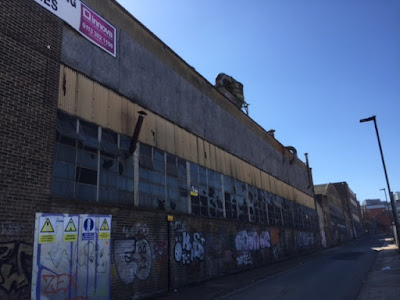 I've tried previously to explain (not least to myself) my doomed love for the ephemerally derelict; the decayed and the destroyed. Through this blog (and dozens if not hundreds of other un-organised photographs) I can document a tiny snapshot of this. Sometimes buildings remain in a state of dereliction for decades, declining organically and imperceptibly, but can then disappear in a matter of days. (When this happens, it makes me feel very disconcerted.)

So on my weekend walk I circumnavigated the Record Ridgway works. The most part of the very large building is not architecturally distinguished or interesting. It's a massive shed in which hundreds of people worked making tools - chisels, planes and other things with blades and edges. 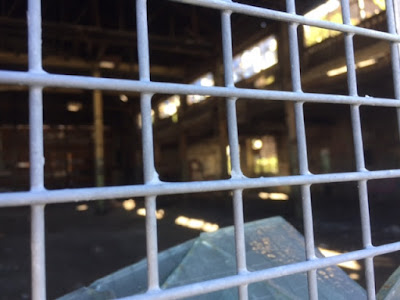 I poked the camera through one broken pane to get a very unimpressive picture.

However, urban explorers have not only explored, but documented the building, here and here for example with some wonderful photos.

Big empty buildings like this don't only attract explorers, kids with a deathwish (I once had a taxi driver who was telling me hair-raising stories of what him and his mates got up to in Kelham Island as boys in the eighties and nineties) and vandals; alongside the crude tags some serious graffiti artists have made the abandoned and all but hidden walls their canvas.

The photos from Oblivion State include this massive, very unnerving but beautifully executed work by the Welsh-born, Sheffield-based artist and muralist who goes by the name of Phlegm, and whose work can be seen all over the world, as well as in a number of places in Sheffield. The Record Ridgway example is particularly gruesome but I do like the surreal detail, often on such a large scale, of his work.