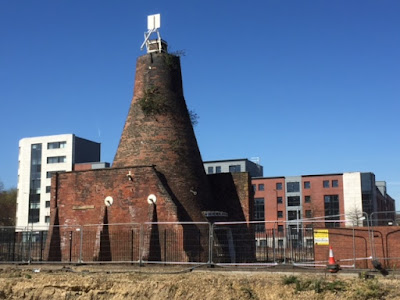 The other landmark that I was easily able to identify on my walk was the cementation furnace. This is the only remaining intact example in the country; there were once over 200 in Sheffield alone. Cementation furnaces were an early means of converting iron to steel.  Pevsner describes the process of making steel by this method, which basically amounted to: pack in layers of Swedish iron bars and charcoal, seal it all up, light a big (coal) fire underneath it, keep it at 1100 degrees for about a week, let it cool, crack the crust of sealing material and slag off the top, and remove your steel, which would then be forged and worked. This method produced 'blister' steel which still contained a lot of impurities and was of limited use. In 1751 Benjamin Hunstman developed the crucible process which produced a purer and more versatile steel. It still needed blister steel to start with though, so cementation furnaces continued to be built as part of steelworks and this one dates from 1848.

The crust of hard-fired clay, grindings and slag was known as crozzle. Hard, impervious and sharp-edged, it was used for topping walls. I have a couple of bits of what I think are crozzle that I dug up in the garden: 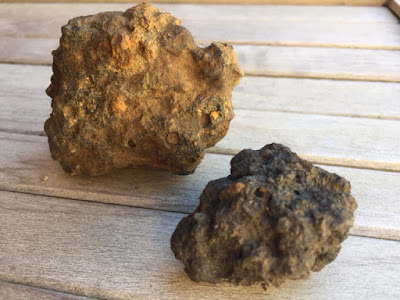 The larger piece even appears to have mortar on it, suggesting that it could have come from a wall. 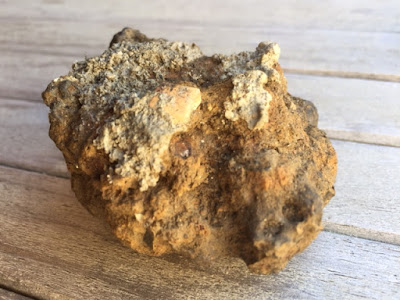 Crozzle has also entered the local vernacular vocabulary. If you like your bacon very well-done, you like it crozzled, and the bits of batter in the bottom of your fish and chip paper is likewise called crozzle, and (I believe) can be requested in the chippy just as in other parts of the country you would ask for 'bits'.

I was fortunate to be able to photograph that aspect of the cementation furnace as it currently stands on the corner of a very large demolition site. 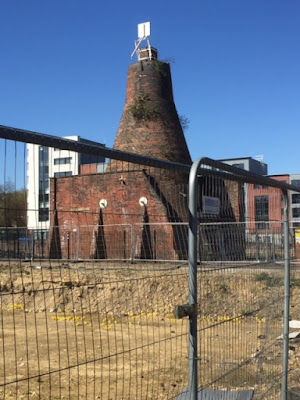 I thought that the massive building that was on the site until a couple of years ago was some sort of industrial research centre (at least at some point in the past) but I can now find no record of that or info about it. The furnace latterly sat in what was a HSBC car park. The site was levelled and some foundations laid, but then nothing happened for a very long time, and I assumed that the developers had gone bust. A recent article in the Sheffield Star claims thatr the delay was pandemic related, and that 'work halted in February last year'  but I recall the site being abandoned for at least a year before that. In any case, they told the Star in January that construction would restart at the end of March. I can report that it hasn't.The plan is for yet more student accommodation, as part of a development of '900 bedrooms' including 260 flats for private rental with an estimated 'value' of £90 million (although the article suggests that the developers still aren't quite sure how they're going to fund it).

Anwyay, if it gets built it will be absolutely massive, and the last remaining cementation furnace in the country will become a garden feature. 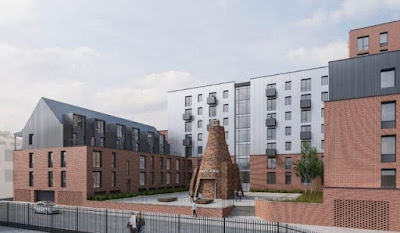 That'd better be a public space!