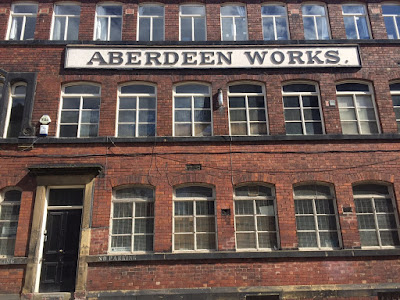 My first stab at Pevsner (with the pin of a brooch; it was very much an impusle thing) sent me seeking the Aberdeen Works. Although the Sheffield Pevsner is a relatively recent edition, it's still seventeen years old now, and in a fast changing city I fully expect some of its entries to be either gone, or significantly altered. Setting off to find the Aberdeen Works, I wasn't sure whether it would still be there.

It turns out I picked - in historical continuity terms - a real gem for my first random(ish) foray. Pevsner (p.127) notes that the Aberdeen Works has been occupied since its construction in 1883 by the same firm of silversmiths, and it still is: Francis Howard continue to produce tableware and giftware in 'traditional and contempory' sterling silver and plate, and are still based at the same address. I suspect that's pretty unusual.

We tend to think of Sheffield as a city of big steelworks, and numerous small cutlery workshops (the 'little mesters') but it was a significant centre for silversmithing too, and of course where the first method for producing a cheaper (than solid silver) silver plate was invented - 'Sheffield Plate', made by fusing a layer of silver and copper in ingot form before rolling it and working it - a hundred years before the invention (or discovery?) of electro-plating.

The importance of silversmithing is evidenced by the fact that in 1773 Sheffield, along with Birmingham, successfully petitioned Parliament for the right to establish its own Assay Office, in the face of stiff opposition from London, which had previously held the monopoly in England. A really interesting and comprehensive history of the Sheffield Assay Office - which while its fortunes have waxed and waned, and its address has changed, over the years, has been in continuous operation ever since - is here, on their website. 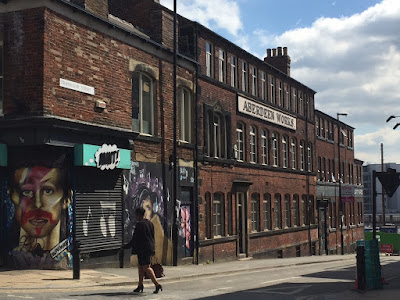 Pevsner notes that 'one office [of the Aberdeen Works] has a big tripartite window, with ashlar surround' which I tried to get into the photo, but it was quite hard in the narrow street. You can see a bit of it at the extreme left of the top photo, and just below and to the left of the 'incised lettering' (which I had assumed meant cut into stone, although the letters here are actually in relief - I don't know whether carved or cast). Love that full stop after the name.

Further on down the street - which is Trafalgar Street, just off Devonshire Street, Pevsner describes the Trafalgar Works ('c. 1900. Very plain fourteen-bay facade with central carriage entrance ... two storey workshops ... four hand forges ...') and notes that it was 'threatened with demolition in 2004.' 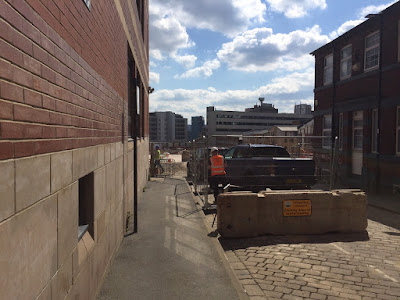 I think this is it: i.e. a cleared site at the end of the road and oh dear, this looks ominous.

Behind the Aberdeen Works, on Canning Street, is a terrace 'of six former blind-back houses, c. 1830 with simple three-storey facades, some retaining sash windows.' 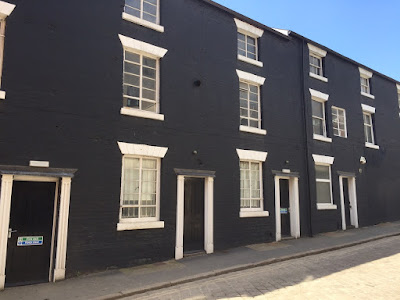 I was pleased to see that they are still recognisably there, albeit now painted a different colour to the terracotta in Pevsner's photo (p. 127), and possibly actually looking a bit smarter; I don't know what their current use is although at least one (the right hand end one) looked as if it might be residential.

By taking a roundabout route, I made this into a three mile walk, and it was a lovely warm sunny spring afternoon. As an added bonus for Joho and other fans, at the end of Canning Street there's a work by Phlegm 'in the wild'. 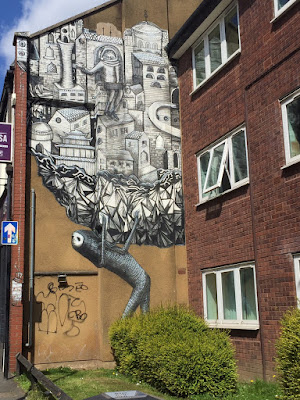 I'm labelling all these 'Walking with Pevsner'  posts, by the way, so should they be your main interest you can filter for them easily. I'm also using bigger image files, so hopefully the pictures should look a bit sharper - although interestingly with the earlier ones, if you click the image to enlarge it, it appears clearer than the in-line version.