As the fortunes of the Port Access Road have ebbed and flowed over the years - nay, decades - the rationale for it has also changed (a bit like HS2).

Originally it was all about shifting lorry traffic from the residential Beach Road and Railway Road; back in the nineties there was still a lot of freight and produce coming in by lorry. There were also big scare stories around the time the incinerator was built that there would be imports of (quelle horreur) French rubbish. As it stands - and in the much lamented absence of the Sussex Express' 'Harbour Jottings' - the two main products passing through Newhaven appear to be scrap metal and aggregates. 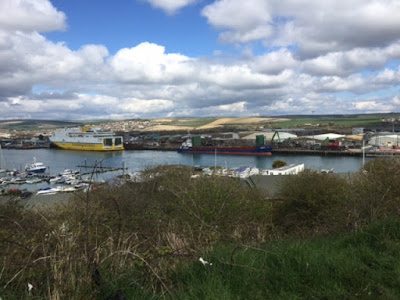 Still things you would rather not have lorryloads of driving past your house, but perhaps not in the volume anticipated (as I recall the prospect of a constant caravan of noisy. dusty. smelly lorries was dangled in front of us when I was on the Town Council many years ago). In our walks last week I think I spotted a total of two aggregate lorries on the relevant roads - although there may be another, very exciting, reason for that, which I will come to later.

Latterly the argument for the road has been that it will 'open up development land' for industrial use, thus bringing jobs and the aforementioned prosperity beyond our wildest dreams. The land in question is (or in the case of quite a lot of it, already, was) to all intents and purposes natural, brambly scrubland - it may once have been industrial, but it had very largely returned to nature. At the same time as former industrial sites on the edge of town are being razed to build housing in their place, industry moves further out to the margins . And fair enough, you couldn't build housing there - it's too vulnerable to flooding, I would imagine. It's sobering though that part of the development has entailed 'species relocation'. The question is, are there really takers for all this new industrial land? 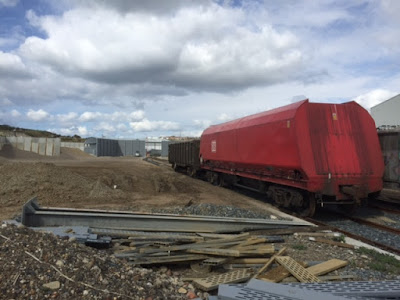 Well, an aggregates firm has already moved in, which seems very fitting. And this is the exciting bit - a new railhead has been constructed for them, so that at least some of their aggregates - which come in by sea - will go out not along Beach Road, nor even the new Port Access Road, but by train! 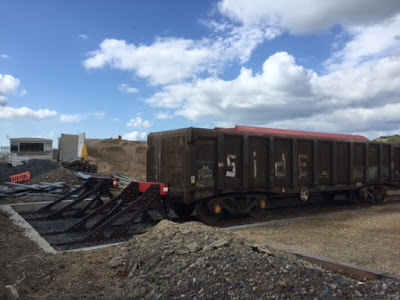 When I make my layout (oh, didn't I mention that?) I am seriously tempted to base it on Newhaven, which has a lot of railway interest (sidings! aggregates! three stations! ok, one redundant and condemned, but I could model the return of the Boat Train) and I could have 313s! (yes but not at the same time). 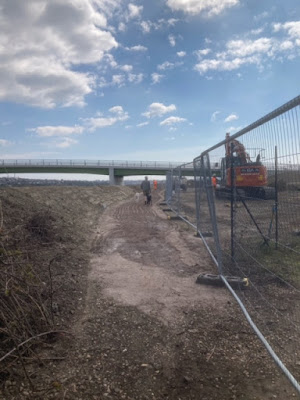 While all this was being set up there was a footpath diversion, from which I got the railhead photos, but on our last walk before I returned to Sheffield, they had just re-opened the new, permanent, footpath route, and we were the first to traverse it. This felt very fitting as we - especially Jim - have been following these developments for so long. 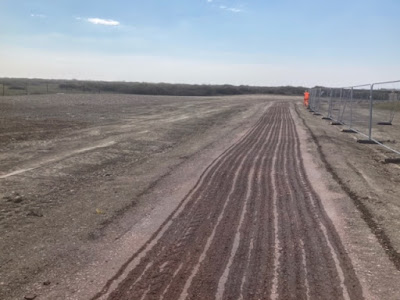