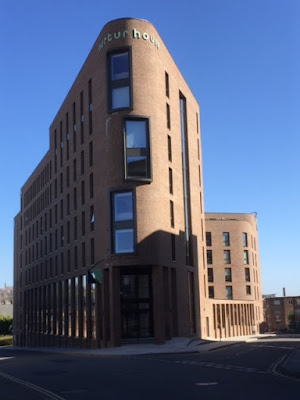 You might be forgiven, on the basis of my last post, for thinking that I object to all student accommodation developments.  Well, politically I might object to the large-scale provision of expensive accommodation for a largely captive market for private profit, and I might also wonder at who is going to fill it if predictions of a post-Covid, post-Brexit fall in international students, and of a trend towards students continuing to study closer to home or at home and online come to pass, but architecturally, here is one new development that I like. Unlike most that are going up around here, it's not a bland, hard-edged brick-faced box. 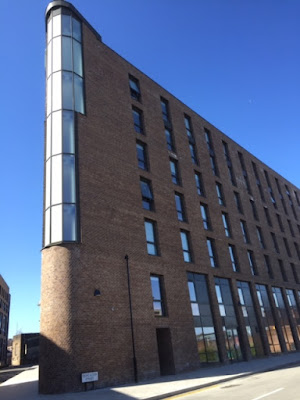 It's called Nurtur [sic] House (yep, stupid name) and it opened last year. It has actual architects - David Cox Architects of Preston, who have an annoyingly flashy website which shows that they have been responsible for a great deal of student accommodation, including their share of bland brick boxes.

Nurtur House has 288 rooms and covers a big site (again, I fear I have no idea what was there before, but a long derelict works would be a fair bet), making the most of an isosceles triangle footprint with two acute angles. 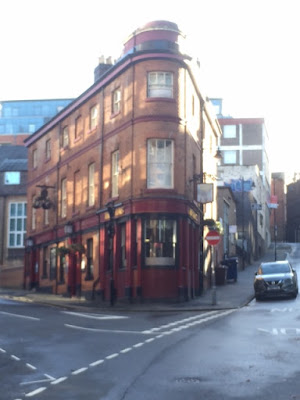 A local pub, the Three Tuns, which I have long admired from the outside but never quite plucked up the courage to enter, is similarly squeezed into a sharp little peninsula between two roads. 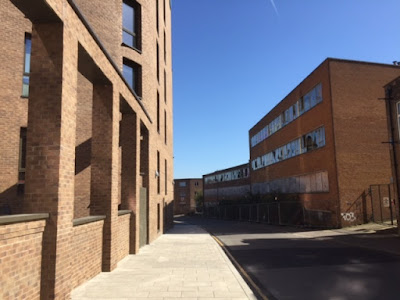 There were some nice little details, like these bats on terracotta covers for what I guess are drainage holes in the top of the wall in the photo above:
Its curves echo those of the nearby Record Ridgway works, which ironically is slated for demolition (and has been for years) 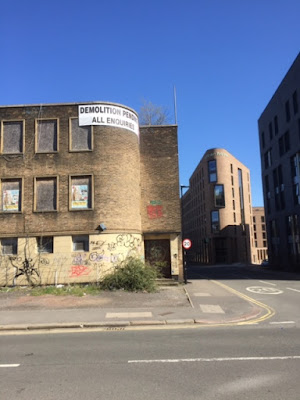 And which I have long had a bit of a soft spot for, since I first viewed it from the now-defunct No. 31 bus. 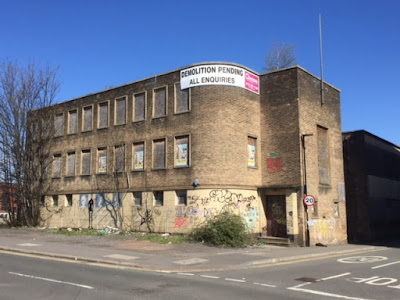 I haven't been able to find a date for this building - most commentators assume it's 30s, but I wouldn't be surprised if it were a bit later. This bit is just the frontage for a massive works (of which more another time) where tools including Marples chisels were made.

Coming full circle (kind of) I particularly like this sun-bleached photo I took of it at the weekend which, I think, makes it look like one of those developers' artist's impressions, complete with arboreal garnish and solitary pedestrian - the ruined past presented as if it were the saleable future. 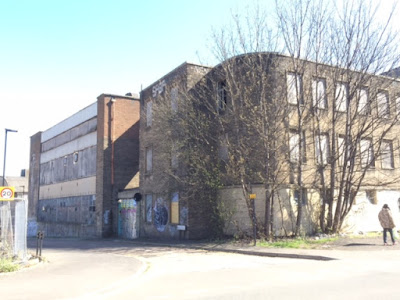