Woking 2016: The Illustrated Edition incorporating Pub of the Trip 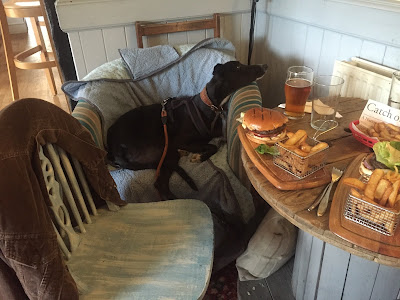 However, there are a few more contenders. Not many - this was a trip where we largely fended for ourselves, with serious on board supplies of food and beer. There are therefore just six nominees, and that's including the festival beer tent. In order of visiting they are:

The Samuel Barlow, Alvecote Marina
Always decent food and usually good service, but (special events apart) a limited choice of beer and not a great atmosphere - maybe as good as you could get in a big square room dominated by a close knit group of regulars. It was a good venue for my early birthday dinner though, as we had our own little group. Very dog friendly, and the steak was excellent value as always. Solid and reliable, but somehow for all that, not a favourite.

The Admiral Nelson, Braunston
Still seems to be keeping up its form - the latest revival must have lasted what, four or five years by now? Sadly we arrived there on a Monday, meaning that the full menu - quite understandably - wasn't available. The bar menu is perfectly good, although the charm of serving chips in miniature chip baskets and fish on ersatz newspaper is starting to pall a little. Mega super dog friendly; good beer, nice environment, so this one is still a favourite, and a regular stop. 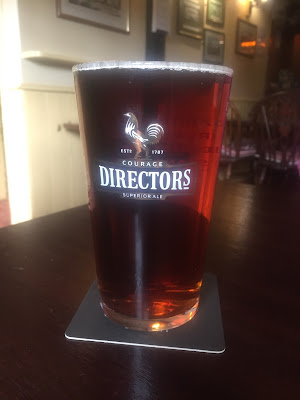 Four pounds thirty five, thank you very much. OK, it hasn't got any nasty froth on the top, but all the same. Weybridge is another world. Also in the Old Crown, we had steak and chips. And that was exactly what arrived on the plate. A piece of steak. And some chips. No peas, no onion rings, no tomato, no mushrooms, not even a salad garnish. It won't be giving too much away to say that this one comes at the bottom of the list.

Thurston Brewery Festival Bar
At three pounds a pint you can't knock it, so I won't. One nice flavoursome beer (Invader) which was alternately on and off with one less flavoursome one. Also a porter for those as likes that sort of thing. The head brewer was there serving and told me something interesting which I hadn't heard before, but which sounded plausible - that IPAs aren't supposed to be really hoppy. His take was that the problem with the long sea journey wasn't with the beer going off, as most beers then were matured for a year anyway, but with the flavour of the hops fading, hence the addition of lots, so that it would still taste normal when it arrived, rather than extra hoppy. I accepted his explanation, but added that I like it hoppy anyway. But not grapefruity or elderflowery.

The pub at Iffley lock (on the Thames near Oxford) 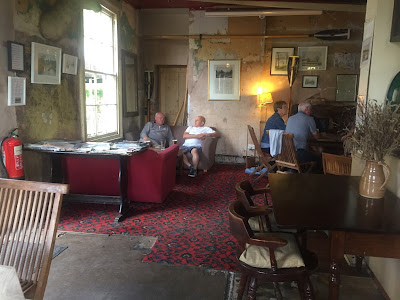 The rather useful Perfect Pint app told me that this was in fact called the Isis Farmhouse, which enabled me to check out its opening times (very specific) and dog friendliness (fine), but no one seems to know it as that. We turned up on a Friday which excitingly promised to be a folk night although that side of things was a little half-hearted. 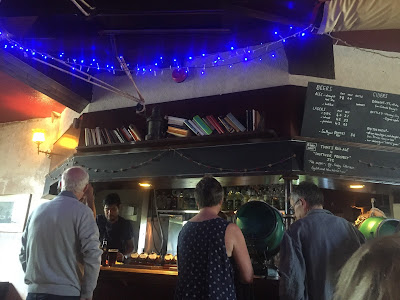 I didn't garner much of the place's history, but it seems to be one of those places that's hard to keep going, largely because it has no road access. A few people (including most of the musicians) arrived by boat, and many more on bikes. In appearance, the place is best described as resembling - well, no, in fact being - a big dilapidated house, furnished with various old bits of furniture, stuffed animal, garden furniture and very tatty soft furnishings. 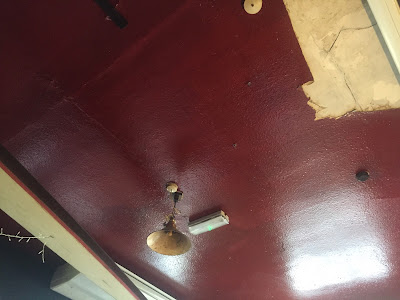 The ceiling is half painted; the carpet comes to an abrupt halt in unexpected places, and the walls are mostly bare plaster. One barrel of very local beer is available at a time. The menu includes beans on toast, ploughmans, and pork pies as well as a couple of more adventurous offerings. I had a pork pie, and it was excellent, and accompanied by home made bread, the freshest salad and a lovely home made coleslaw. 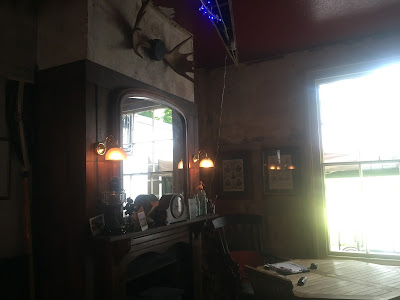 The Greyhound, Hawkesbury Junction
Another longstanding favourite, a canal pub that somehow manages to retain a tiny bit of a sense of  history and mystique (for all the Nelson's virtues, it sadly doesn't). We arrived early accepting that we would stand around for a while waiting for a vacant table outside in the sun, and our patience was rewarded. Ever reliable for Bass (which I find a bit sweet now) and something Robinson's quite nice and not too strong for me. The mixed grill caused no complaints (especially not from the dog), and we saw two people successfully execute the turn, one of them a hireboater with a broken arm. Neither was a particularly long boat though.

The Greyhound, I think, is the runner up this trip, but the winner is... You've guessed it, the pub at Iffley lock. Go there if you can.