One for the album

Inspired by my recent re-bonding with Chertsey, and in time for this weekend at Alvecote, I have finally finished compiling a new information sheet (twice as long as the old one and also available as a flier!) and photograph album. One of the reasons for producing it as a flier is so that people can take away my email address and send my any nice action shots they've taken of Chertsey on its travels. So often you see people snapping away - sometimes they even ask! - but by the time you've had a conversation and written down the email address the you're probably out of earshot. So if you've taken any nice photos of Chertsey.... my email address is the URL of the blog less the www. and the .blogspot.co.uk and plus @gmail.com.

Over the years I've had Chertsey (seven now and counting) I have acquired some very nice photos. Many of these however came with the proviso that they not be put on the web, and some that they not be publicly displayed. Hence I have compiled an album for sharing privately (on request) which has the added advantage that I can include more pictures and put them in chronological order, providing a kind of narrative of Chertsey's life.

Looking back through the photos though I found this one that I really love, which I am allowed to share, taken by Richard Pearson of Chertsey loading coal at Gopsall Wharf on August 18th 1970 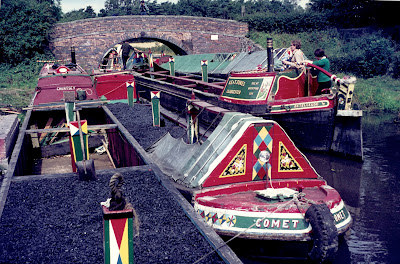 And this one, of the same coal being unloaded at Croxley Mill a few days later. 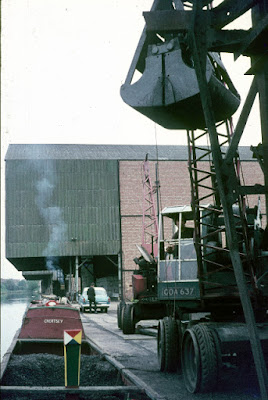 I'd still really like to recreate this journey one day.
Posted by Sarah at 20:01