At last we have had the opportunity to take Chertsey to Chertsey  - on August 9th, the day after we left Woking. 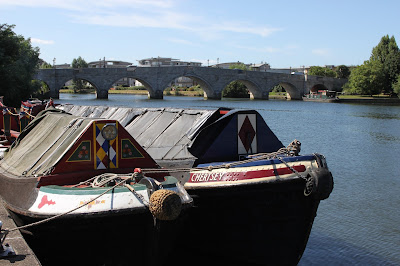 Quite serendipitously, from the point of view of messing around taking photos, of all the Thames locks we went through (oh, except for one early in the morning), this was the only one that was unmanned. 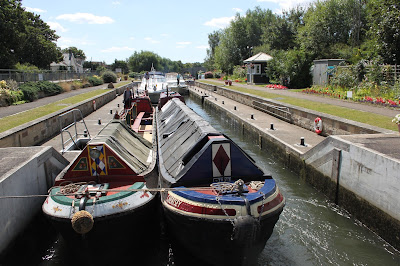 I quite often get people noticing the boat's name and asking 'Do you come from Chertsey, then?', which is of course an opportunity for a potted history of the ambitious expansion of the Grand Union fleet, until their eyes glaze over or they're out of earshot, whichever happens first. But I was struck on this trip by people saying 'Oooh, you're a long way from home.'  Well, yes - but I was in Chertsey only four days ago, so not that far really.

Anyway, it was lovely to get the photo opportunity at last.
Posted by Sarah at 21:06