Ah, but not just any old ball of string. Two hundred and twenty metres of 10mm synthetic cotton rope. The long winter evenings will just fly by. 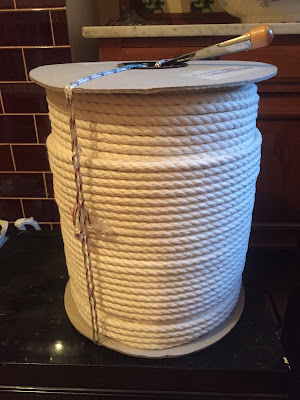 I set out to look for 10mm Hempex, which Chertsey's current top strings are made of. After nearly seven years, they're still going strong, and we've just reclothed the boat with them again. The fact that they're green and grimy is my fault, for never having attempted to wash them. The hooks, however, have shed their galvanising, and all gone rusty. Of course I could remove the hooks, wash the strings in a pillowcase, and attach new hooks - but then what would I do for a winter project?

Also, Chertsey needs sidecloth strings. The 'temporary' blue polypropylene which has been in use since 2012 is finally giving up the ghost, shedding blue fibres everywhere. I'd hoped originally to splice these direct onto the sidecloths, but I fear that would be impractical, especially at the speed I splice.

Anyway, I found Hempex eventually, but then I found this, and I thought that - at least when it's new - it would look even better. Especially if I give the cloths a proper scrub too.
Posted by Sarah at 21:47