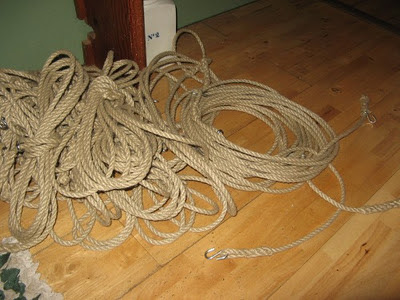 It's been far too wet today to actually try and fit Chertsey's topcloths, but we have completed a fair few of the strings that will, hopefully, hold them in place. Some of our splicing was still a bit hit and miss, and some of the results not the prettiest, but whatever people think, at least we will be able to say that we did them ourselves.

Each string is about eighteen and a half feet long, with a hook attached by an eye splice at one end, a free hook running on the string, and a back splice at the other end. This is just one possible way of doing things. Originally, it seems (at least from watching 'Topcloth and Tippet') that the strings were spliced directly onto the rings along one side of the boat, and once passed over the top planks, were threaded through the rings on the other side. This of course requires you to have a hand at gunnel level; not so easy if you're out from the bank. Also, It was hard to keep the strings clean and tidy when not in use. So boatmen developed the innovation of hooks on the end of the strings. In this way, the strings could be put away when not required, and, when clothing up, with a bit of practice, the ring could be hooked from the top plank. The idea of a second hook, to hook the ring rather than threading through it on the other side, was not something I had seen done before, but I had thought about it, so when Pete suggested it, I didn't have any trouble agreeing. As it happens, we didn't actually have to do the splicing with the hooks in place, as they are 'S' hooks, crimped in place afterwards with Jim's largest slip jointed pliers.

Because I still couldn't get the hang of the crown knot (until I looked it up here), I concentrated on the eye splices; Jim, conversely, couldn't do eye splices to his satisfaction, so an efficient division of labour emerged, and by lunchtime we had completed fifteen strings. We will need slightly shorter (and possibly ceremonial cotton) ones for the cratch, and a couple of longer ones in which to fashion a loop to carry the long shaft, although I've no idea yet how that's done. We're using 10mm Hempex which is OK to work with, although the ends have a tendency to go fluffy and it's bloody hard to cut. It looks really good when it's done though, and is strong.
Posted by Sarah at 19:37