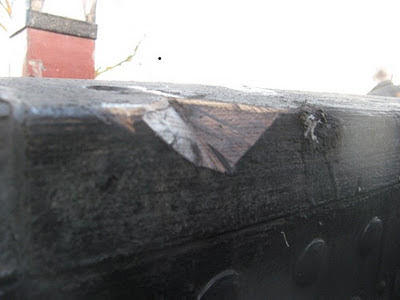 Today in anticipation of Chertsey's cloths being fitted tomorrow, Jim made the notches in the gunnels, above which the rings for the topcloths sit. These notches seem to serve two puroposes; to make it possible to catch a ring with a hook whilst standing on the top plank, and (this is something I thought of myself) to thread the end of a string through one-handed. On some boats, the rings sit down inside larger scallops, but this seemed to me to be less useful, so rightly or wrongly, I've gone for a notch that, hopefully, the ring will sit flat above, stapled to the gunnel and flush with or just behind its edge. 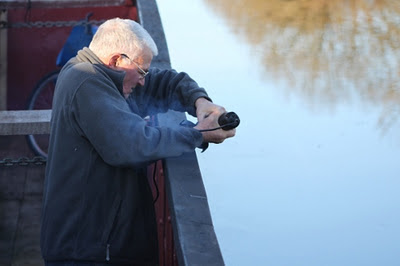 Jim cut the notches with an angle grinder, amidst much smoke and smouldering oak. There are 28 of them. In total, there are going to be eighteen top strings, four at 13" intervals on the cratch, and the remainder at 3' intervals. This concurs with the drawing I have, which is admittedly for a butty, but apart from the longer hold I don't know why it would be different, which specifies 3' intervals and 15" on the cratch (we were a few inches short once we got to the front, hence Chertsey's being 13" here). It also fits what I have been told by other people (some have said that they can, and should, be even less - 28"). But the mysterious thing is that when you look at old photos of GU motor boats, they only seem to have 13 top strings aft of the cratch, suggesting a wider spacing. There are fewer notches than strings because those at the front, where the gunnels widen and curve in, are set further in and not on the edge.

We drove ourselves mad finishing before the light went (Jim had to go to Screwfix for a new grinder as his old one had broken ages ago), and finally, having got some bitumen on the cut wood, retired indoors to practice our splicing, only to get a message from Pete to say that he can't come tomorrow after all. So it will be Thursday now before Chertsey finally gets smartened up.
Posted by Sarah at 19:05