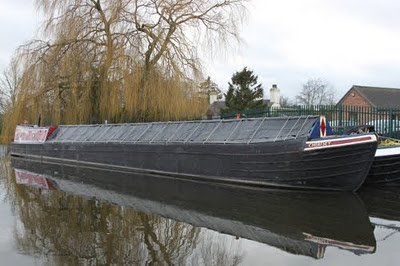 As Paul on Prince said. Made me wonder, when did Chertsey last have a full set of cloths on? My guess would be circa 1964.

Yes, at last today the rain stopped and the wind dropped for long enough for us to tackle the topcloths. In the end it was fairly straightforward, although terribly hard on the knees (mine). The positioning of the rings over the notches worked perfectly and hooking them from a kneeling position on the top planks was dead easy. Jim then slipped the hook in on the other side, balancing on the gunnel, braced against Bakewell, and helped pull it tight. I then improvised a tying up technique as best I could, based on a combination of instinct and half remembered examples from the Topcloth and Tippet video. 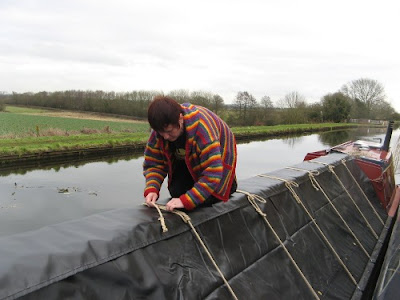 The cloths fit beautifully; there are four of them, each thirteen feet long, which allows for a foot overlap between them. The tippet however is in only three pieces, and the overlaps haven't lined up with the strings the way they have for the cloths, leaving an end or two flapping. The solution I think may be join the three tippet pieces together; traditionally I think it would have been in a single piece. For the time being I have joined the worst place with black gaffer tape. The tippet by the way is the narrow strip of cloth that goes on top along the top planks, to reduce wear on the cloths themselves.

Unlike traditional cloths, Chertsey's have eyelets in them. This will be useful for keeping the corners down (we went and bought a great deal of black elastic this afternoon) and may enable us to use them more flexibly. I decided to have them on a 'might as well/better safe than sorry' basis. 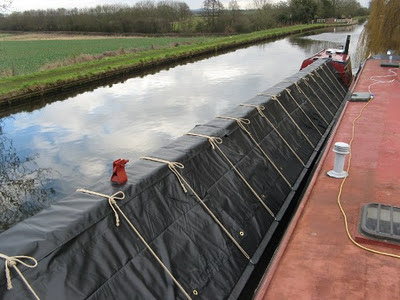 We hadn't quite made up enough strings, and it was interesting how we can now just nip in and make a couple up. I must say that the splicing had taken a lot less time and effort than I had anticipated. My eye splices have definitely improved with practice, and if you see Chertsey you can have fun working out which were earlier and which later efforts. My back splices too now are lovely although I do still need to refer to the diagram to get started. My next project is to attempt a short splice, whereby you join two lengths of rope together.
Posted by Sarah at 18:19