OK, I like catching up with people. I like showing off the boat. I like sitting around in the sun. I can do all that at Braunston.

I don't like crowds. I don't like raucousness. And above all I DO NOT LIKE SIXTIES HITS* BLASTING OUT OF LOUDSPEAKERS ACROSS THE SITE ALL AFTERNOON. OK, it's not quite Guantanamo or North Korea (but enough to bring both of those to mind), but it's certainly close to my worst Butlins nightmare. The music may be too loud at Braunston, but at least you can get away from it. Alvecote is so intense, co concentrated; so confined. Braunston is spread out along the towpath, plus there's a bigger site to wander around.

By Monday afternoon, I had definitely had enough, and was mightily relieved when it finally stopped. But it was a good weekend on the whole. It's good to be able to chat over breakfast with different people every day, if less good trying to chat over the music in the evening. The gin bar, which I'd been looking forward to, was disappointing this year - there seemed a lot less enthusiasm and panache behind it. In fact there was no one behind it when I tried to get served and I was driven out by the volume of the music to seek beer downstairs. There was a decent variety of beer still, so that was ok.

There were lots of people and boats there this year who hadn't been before, including many of what I think of as the 'old guard' - or perhaps less rudely, pioneers, including Swan, Bath and Aquarius (which won the award for best turned out boat, which was good, to see it go to a Grand Union). Most people certainly did seem to enjoy themselves, but I suppose the proof will be in how many of them come again next year. It's a bit different for us, as we're there already - although on Monday afternoon I was seriously considering staying away next year, I'm sure I'll have forgotten by then.

We did not participate in the parade - the ever-popular amusing commentary is another thing that repels me somewhat - but did our best to provide entertainment by clothing the boat up on Monday. It was good to be able to do it without time pressure (other than that presented by the weather forecast). Chertsey is now de-Erewashed, with deckboard, mast and stands up. We'd toyed with running with them down long term, as there's still quite a lot of headroom inside, but it is harder to keep the cloths weatherproof that way. Getting the heavy black cloths on again was lent added urgency by the fact that the lightweight translucents had not only blown up in places, but have developed a lot of holes, mainly from rubbing on the top planks. We put them on in rather a hurry in the srping, you might recall, and forgot (or neglected) the tippet - that narrow strip that goes along the top plank and protects the cloths from wearing under the strings.

This is us on Sunday, when it rained all day. 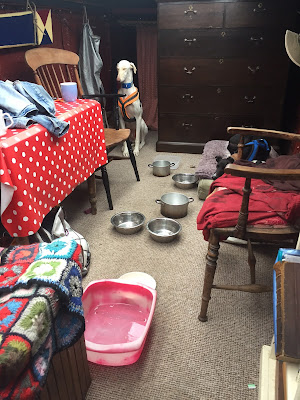 I was glad then of the natural light afforded by the translucents at any rate. It is now of course very dark inside (we have one small area of window tpwards the back), but hopefully watertight.