One of the beauties of having had a blog for over twelve years (since April 2006, new readers!) is that every now and then it reminds me that a feeling, or opinion or experience that I thought was new was in fact just me repeating myself. One such example is my feelings about the Alvecote gathering which I wrote about a couple of days ago. Randomly clicking through old entries, like you do, I came across this from 2013 - in which I express pretty much exactly the same views. Yet until I reread it, I had pretty much forgotton having even felt it, let alone said it.

Then I looked at the previous post, in which Nick on Aldgate and Mick on Cassiopeia had visited to take down details of the nifty little device that Chertsey's PD2 has to throw the decompression lever at the right moment when you're in the process of hand starting the engine. 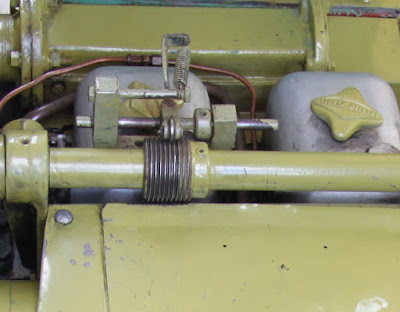 Apparently only Chertsey has this, but other PD2 owners envy it.  Five years ago the asked about it, and I said yes, of course they could draw/photograph/borrow it...  and last week they were still asking about it...
Posted by Sarah at 20:16