A Star is reborn

Many years ago (the photographs now sadly buried under the bed of time) when we first started hanging around this yard with Warrior, there was a boat on the bank. It wasn't a whole boat, just the front end of a hull, with a recognisably Northwich stem post. Later it didn't even have a bottom either, but sat balanced on its bony knees, awaiting its turn to be restored to a new life, in a third reincarnation. 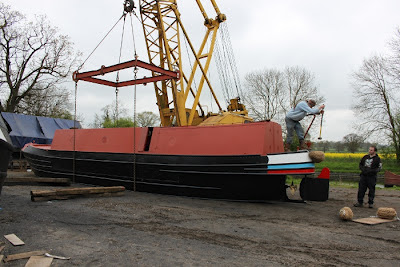 Enceladus was a 'Small Northwich' iron composite boat built by Yarwoods for the GUCCCo in 1935.  Its second incarnation was as a British Waterways hire boat, called Water Valiant.   It carried on being Valiant into private ownership, with a wooden cabin, and was clearly in pretty bad shape by the time it made its way onto the bank here. 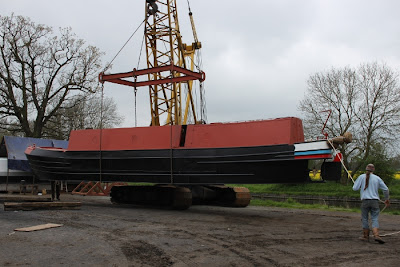 But now it is a beautifully proportioned 50' tug, with a completely new stern end, tug foredeck and steel cabin, that I have been privileged to watch the development of over the past few months. The time and trouble that goes into something like this has to be seen to be believed. 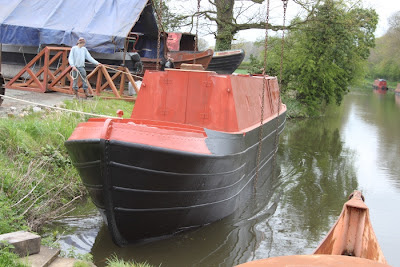 And today, at last, Enceladus' new bottom felt the water for the first time. As I write, her new owners are shifting tons of ballast aboard, preparing for the journey to be fitted out at Brinklow. 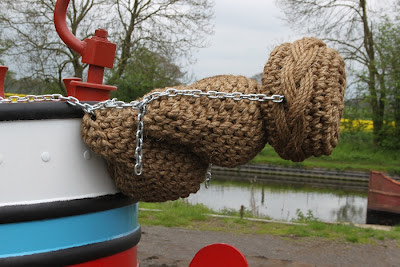 Complete with rather lovely fenders, made by Brian on Alton.

(Why are my photos displaying so small now? Bloody blogger)
Posted by Sarah at 17:37