You might think that one smokeless fuel is very much like another. Certainly I used to find the in depth comparative discussions on Canalworld to be rather esoteric and obscure. I took it for granted that Taybrite was the best, and worth the extra pennies, and we stocked up on some. And it was OK, we were happy, we were warm, the fire ticked over, we filled the stove with coal and emptied the ash and would have thought nothing of it... Until one day we were running low, we were in Midland Chandlers, and they were selling some stuff called Stoveglow which was a bit cheaper than Taybrite, and right there under our noses, so we bought a couple of bags.

My first reaction was that it smelt nastier than Taybrite, when you first put it on and the fumes wafted back at you. But I quickly noticed too that it produced a different sort of ash, less dry and dusty; and gradually it dawned on me that it produced a lot less of it too. It lit easily, stayed in exceptionally well, and had remarkable powers in coming back from the dead if it ever was abandoned for too long.

Fetching a few bags at a time from MC in Penkridge was no hardship, although they could never predict when they would have it in, or how much, but we got through the winter fine like this. Then a couple of weeks ago, they didn't have any. We managed to get a bag or two of Taybrite, then were reduced to using Homefire, which was easily the worst of the lot. But now we were used to the Stoveglow, even Taybrite was unimpressive. I was removing a tray full of ash for every small bucket of coal on Chertsey's Epping, whereas with the Stoveglow it was more like one tray for every three buckets - that must surely mean it was burning more completely and so being better value, regardless of the extra convenience too. I noticed also that the fire kept going out, in circumstances it wouldn't previously have.

Well, I thought, it's May now. I'll just let it out for the summer. But last night was pretty damn chilly and more cold weather is forecast. It's all right for me; I can snuggle up with Lionel*, but the condensation's no good for the cabin, and I don't like my boat to be a chill, unwelcoming place.

So after searching in vain for other suppliers of Stoveglow, we ascertained this morning that MC had two bags in stock, and Jim dashed off to get them straight away. 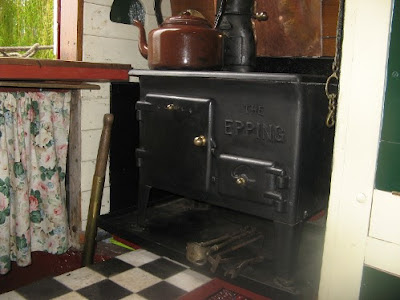 Meanwhile, with the Epping being cold, I thought I would take the opportunity to give it a good spring clean, and use the new flue brush for the first time. I didn't manage to take any photos of the work in progress, but I am pleased to report that the Epping is quite an easy stove to clean, with removable plates both in the smoke box and above the oven meaning that it's not difficult to get at all the crud and sweep it down into the firebox for removal via the ash pan. Having the luxury of 240v I finished the job off with the little hoover that came with Bakewell, but it would have been a perfectly effective job without that. I then gave the stove a polish, so that's its spring clean for the year!

The coal box is now restocked with Stoveglow, the fire lit, and the cabin airing. If anyone knows of a reliable or even better bulk supplier of Stoveglow in this area (Cannock-ish) we would of course love to know about it. 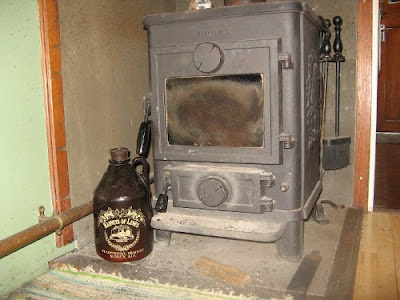 Meanwhile the Squirrel on Bakewell has to be kept warm for our new pet, who sits beside it and snuffles and gently snores. More about Ginge later....