The dangers of health and safety

Health and safety gets a bad press. There are many powerful vested interests who would like nothing better than to see health and safety legislation, and the powers of the Health and Safety Executive to enforce it, watered down or even abolished altogether, in order to increase their profits by putting others in danger. So nothing I say here should be taken as an attack on this aspect of health and safety as a concept.

At the other extreme, however, are those who would undermine this worthy cause by using 'health and safety' as a frivolous pretext for pursuing their own interests, avoiding doing things, and stopping others harmlessly enjoying themselves because they can't be bothered to work out if it's dangerous or not, and live in fear of the other villains of the piece, ambulance chasing lawyers and craven insurance companies.

Caught in the middle are those who have a duty to the public and are genuinely trying to do their best in a difficult situation; criticism of the outcomes of their efforts should in no way be taken as a criticism of the intentions. But when those outcomes arguably increase rather than decrease the level of danger, criticisms do need to be made.

Health and safety legislation exists primarily to protect employees from unscrupulous or careless employers. Employees are in a difficult position; they may know they're being asked to do something dangerous, but feel unable to refuse for fear of losing their job. Legislation like the Health and Safety at Work Act aims to prevent them being put in that position, and to give them back up if they are.

It also protects the general public from the carelessness or corner-cutting of others. You might not give it a lot of thought as you walk down the street, but you'd soon notice if a brick fell on your head from a building site, or you fell down an unprotected hole in the pavement.

It is when it comes to protecting people from their own idiocy that the issue becomes a bit murkier. As a liberal, of course I believe that people should be allowed to put themselves in danger if they want – rock climbing, surfing, boating, driving a car – people should be allowed to weigh up the risks and make their own decision. But what when the risks are maybe not clearly apparent, or we are talking about people too stupid or too impulsive to be aware of them? If they haven't made an informed choice, can it be said to be a genuine choice at all?

The trouble with going down this road, is the more you take such choices away from people, by removing the risks, the less able people become to make them; the less aware they become of the potential dangers. An unforeseen consequence of well intentioned risk reduction measures is that people now have a tendency to believe that everything is safe unless otherwise stated, because 'they' (the powers that be) wouldn't allow it to be otherwise. So people don't even consider the risks for themselves. More accidents happen, risks are reduced even further and a vicious spiral ensues – with the massive side effect that many activities and opportunities are then denied to people who would have been prepared to weigh up the dangers and take responsibility for minimising their own risk, and would have benefited enormously from undertaking them. There are other arguments as well, too complex to go into here – for example, that if children don't learn to deal with danger as they grow up they are ill prepared for behaving safely in adult life, and that this risk aversion (on the part of parents as much as the authorities) is in large part to blame for the generation of obese couch potatoes we seem to have bred recently.
**************
British Waterways are in a uniquely difficult position when it comes to the safety of the public. They are responsible for a system which unavoidably offers unparallelled opportunities for people to be drowned, squashed, crushed or otherwise mangled, and this is an inherent part of the system: without water, locks, swing bridges and paddle gear, the system could not function; in fact, it would not exist. But unlike, say, Network Rail, BW cannot simply exclude the general public from the vast majority of its land and its operations. Public access has become part of its raison d'etre. They are treading a difficult line in balancing the needs of waterways users with the safety of the general public, and on the whole, they do it well – or at least, in other words, things could be a great deal worse. When, however, a measure intended to protect the general public – or rather, the tiny minority of the public sufficiently reckless to get themselves killed – actually introduces new dangers for the system's core users, then something needs to be said.

Last summer, a boy tried to ride a bike across a narrow bridge (which was not in fact a lock tail bridge but an access bridge that the public would have no cause to use) at Stourport. He lost his balance, fell in and drowned.* Following this, BW have been fitting new handrails to a number of similar bridges which do cross lock tails, mainly on the Staffs and Worcs. The exact chain of decision-making and responsibility that led to this is something HNBC are still trying to clarify. The general view was that the Health and Safety Executive demanded that BW take action, but now it seems to be emerging that BW voluntarily undertook a review of tail bridges and found that there were many which did not comply with its existing policy, prior to any judgement by the HSE, who did however subsequently approve BW's proposed actions, of installing handrails where there were none, and bringing others up to a certain height.

It is easy to accuse BW of a knee-jerk reaction (and I think the jury is still out on whether such an accusation would be fair in this case), but they were probably mindful of a recent case in which Network Rail were fined very heavily following the death of two teenagers on a level crossing, for failing to foresee the potential dangers and take 'reasonable actions' to mitigate them. I am pretty sure licence payers would be up in arms if BW had been hit with a similar fine. On the other hand, a lot of trouble and expense, let alone additional danger, could have been saved if BW had had informed discussions with the HSE, and proper consultations with canal users, before leaping into action.

So BW's actions might be largely understandable. Unfortunately, however, the result does little if anything to improve safety for the general public (for example, the handrails wouldn't stop a cyclist trying to use the bridge, and would probably increase the chances of them falling off) who in most cases have no need to use the lock tail bridge anyway, as there is a road bridge only a few yards away. It does however significantly increase dangers for boaters.

The most egregious example of this is at Falling Sands lock on the Staffs and Worcs. The new handrail (which can't be fixed to the tail bridge itself; whether for technical or heritage reasons I'm not sure) is, for some reason, not bolted to the ground either side of the lock, but to the vertical face of the lock wall, beyond the bridge as you approach the lock from below. This means that it is obscured by the bridge, and, when we were there, was painted in invisible grey primer (BW have promised they will be painted white soon). It reduces the headroom under the bridge by nearly a foot. We just managed to get Chertsey's engine pipe under, but that is six inches shorter than a standard one. Stanton had to stop and dismantle their cratch in order to get under. And, worst of all, it is easily low enough to catch a steerer's head, and knock them out and into the water. 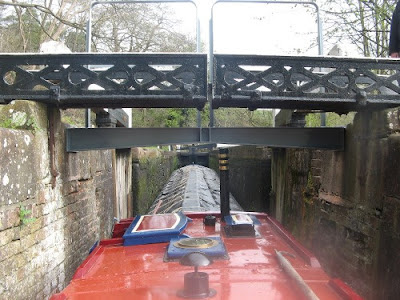 When this was first brought to BW's attention, they retorted that the new lower height was still 'within the published minimum dimensions for the waterway', as if that were all that mattered. Later they mentioned the new lower level on Waterscape. But that really isn't good enough - people who are familiar with a particular waterway are not going to check the (unreliable at the best of times) website every time they set off just in case a bridge has been lowered. What was really needed was a simple sign at the lock 'Warning: Reduced Headroom' for example. Nipping round to remove a hot engine pipe unexpectedly while travelling into the mouth of a lock may well be within the capabilities of most of us, but it undeniably puts us at increased risk, while the danger of an unwary steerer – just as likely on a modern boat – banging their head on an unexpected and all but invisible bit of steel is a very real one.

From a historic/working boat point of view the new handrails have introduced other potential new dangers too, especially for towing. BW have on the whole been receptive to representations from HNBC on both this and on the issue of whether the new rails are in keeping with the historic environment – but they have had to balance this against their decision to have the handrails in place by the start of the cruising season. For example, curlicues on the ends on the handrails which could have snagged a rope were removed from an earlier proposed design.

Nearly everyone would agree that the canals need to be made as safe as possible for the people who use them, within the constraints posed by their very nature. We as boaters accept that we are undertaking an activity that has risks. We make ourselves aware of the risks and we take care to minimise the dangers. We are, by and large, pretty well informed about what we are doing. The general public it seems is increasingly less aware of the risks, and less willing to take responsibility for their own safety. This may apply only to a very small minority in actual fact, but that doesn't help when a member of that minority ends up dead and the finger of blame is pointed at BW.

The important lesson to be drawn from this, it seems to me, is that drastic measures should not be taken in a hurried fashion, reacting to any given incident. Rather, there should be detailed discussions with the HSE to decide whether any new measures really are necessary, with BW/CRT arguing as strongly as possible for minimum intervention; and secondly, if new measures are deemed necessary, they should not be undertaken until there has been extensive consultation with waterways users – boaters above all – to ensure that they do not make matters worse or increase the dangers to the people who actually use the canals. BW, whilst acting with the best of intentions in this case, has squandered a lot of goodwill, and potentially given just a little bit more ammunition to those who would seek to deride and undermine the very concept of health and safety.

As a postscript, while at Stourport last month, I watched a boy of about ten or twelve attempt to ride a scooter across a top gate walkway. What next I wonder?

*Interestingly, last year at least three teenagers died as a result of attempts to jump across locks, but this hasn't resulted in any additional safety measures, presumably because it isn't possible to do anything that is 'reasonable' and 'proportionate'.